(In Which I Make a Short Story Long)

Do you like to hear the story behind a gift?  We do!  In fact, it can often take us a long time to open gifts because there are stories to tell.  "The reason I chose that one..."  "You'll never guess where I found this..."  "It was the night that Dad and I went to the house tour..."

This year, a gift from Ron had a story that was almost better than the gift!  Well, no...it wasn't really better.  But the story did make the gift even better!

I like to freshen things up in my house from time to time.  (I used to rearrange the furniture when I got in the mood for a change.  There are two reasons why I do not do that anymore.  One, I have too much stuff.  As we have filled the rooms with furniture over a span of thirty-one years, everything has its place and there are just not a lot of ways to move things around.  Two, I am just too old.  In my younger days, it was nothing to, on a whim, shift and drag and slide large pieces of furniture all over the place, trying for a new perspective.  And if I didn't like the result, I'd just shift and drag and slide everything back.  Today?  It is me that I am shifting, dragging, and sliding and that is enough.)

So with a mind to freshen up the house a bit, I looked at the picture that hung over the loveseat in the kitchen, the one that had been hanging in the same place since we remodeled the kitchen in 1995...and I decided that we needed to relocate that picture and hang something else there.  I might have mentioned that a Warren Kimble picture would be perfect in that spot.  ~smile~ 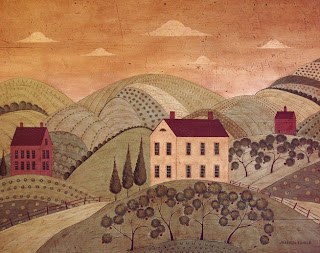 Now for the story...
In mid-November, Ron secretly ordered a Warren Kimble autographed print as a Christmas gift for me!  He had it shipped to Kristin's house, and he and she waited for it to arrive.  When a few weeks went by with no signs of said print, and then when our bank statement had no record of the transaction, he decided to call the business.  He spoke with Elena and learned that the company who took care of orders had quit, and so Ron's order was lost in the other company's records.  Elena told him to mail them a check for the print, and that it would be mailed out right away.

More time went by, and Ron called again to make sure that his check had arrived.  He spoke with a gentleman who told him that Elena was not there, and that he wasn't sure whether the check had arrived because they had not checked the mail, but that Elena would return his call.

Shortly afterward, Elena did call Ron, and she assured him that the print had been mailed.  "Warren, when did you mail 'Burnt Hills'?" she asked someone in the room.

Ron had talked to THE Warren Kimble!

So as Ron told me this story on Christmas Eve, I was star struck!

My husband had had a conversation with Warren Kimble. I looked at him with new respect.

The print did not arrive in time for Christmas, but it did not matter to me one bit. I knew that it was on its way, and that it had been mailed personally by Warren Kimble.

It arrived at Kristin's house the week after Christmas. and she brought it when they came for dinner. While everyone else was filling their plates, I sat on the loveseat and carefully opened my print, admiring Warren's very neat handwriting on the address label. Inside was the desired print, with the promised autograph. There was even one of Warren's own business cards, which I have put up on my refrigerator below the family photos. (I wonder if he minds me calling him by his first name.)

I continue to be star struck.

"Burnt Hills" has not yet been hung above the loveseat. Ron made a fram for it on Saturday, and I am painting it this week. I promise to show it to you when it's up.

And you can oooh and aaah over the art that was created by the Warren Kimble...who talked with my husband.