My, but it was a busy weekend! The busyness actually began on Thursday and we went from one thing to another until we went to bed on Sunday night. Projects, outings, and gatherings.

And the snapshots? Hardly any.

On Thursday, Mom, my sister Linda, and I met at my aunt's house where we began a family photo project. Robin has albums and boxes full of family photos, ranging from the very old...

Linda is scanning and organizing the pictures and she will upload them to an online storage site where anyone in the family can access the photos. It's a big job, but it will be a wonderful way to preserve family history.

Our Keepers at Home club met on Friday and the girls worked on embroidery projects. I have no photos of our meeting, but this is a picture of Bekah's project.

On Friday night, the four of us went out for dinner to celebrate Ron's fifteen year anniversary at his company. Ron is a good and faithful provider for his family and we wanted to honor him for that. We let him choose the place and we were not at all surprised that he chose a steak house! We were all set to take a few selfies on Kati's phone when the server came with our appetizer and then we forgot. (Did I say blogger fail?)

Saturday found us all over the place! Ron had a breakfast meeting and then came home and did yard work. Kati worked both of her jobs and then went out with her coworkers on Saturday night. Bekah went to Kristin's house for her summer sleepover. I took Bekah to Kristin's, made a quick stop at my parents' house, ran errands (which may have included a stop at Starbucks for iced coffee), and grocery shopped. Ron and I ended the day with a date night, fajitas-for-two at a Mexican restaurant.

Sunday was the day for a big house project!

Ron finally hired a man to replace the duct work under the house for the heat/air conditioning. I say "finally" because people aren't exactly lining up to do such work under an old farmhouse that has very little crawl space. Now Ron is a DIY kind of guy and he has worked under the house many times over the years, doing plumbing, insulation, and wiring. But that was back in the day...and now...let's just say that when he ran a line to the computer desk a few years ago, it nearly killed him.

No, such things are better left to the (young) professionals these days.

Knowing it was supposed to be hot on Sunday (it was!), and that the air conditioning system would be turned off for an indefinite time, we canceled our usual Sunday afternoon gathering and Kati canceled a game party that she had planned for the evening. But by the time Kati and I got home from church, the men had already finished the work, cleaned everything up, the AC was humming right along, and the house was pleasantly cool! No need to have canceled anything. Oh well.

The three of us drove down to get Bekah from her sleepover, and Brian and Kristin took us all out to a local pizza place that they like. Now we like it too!

We wrapped up the weekend by attending a birthday celebration for Ron's sister Debbie who was born on Flag Day! 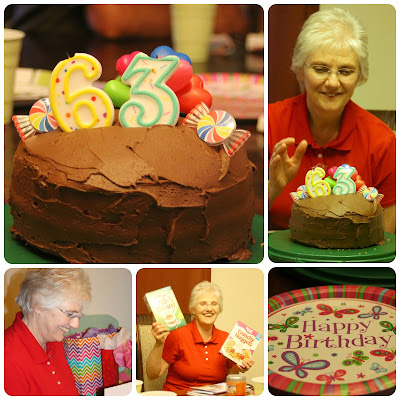 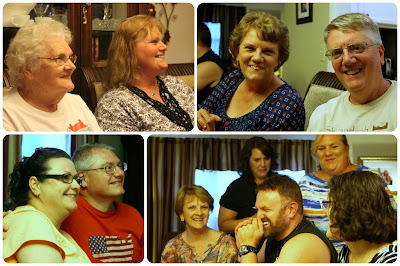 Lots of activity. Lots accomplished. Lots of fun. Little cooking. That sums up our weekend.

How was your weekend? Did you take any snapshots? :)

Posted by Cheryl
Labels: at home, away from home, home celebrations, Sunday Snapshots