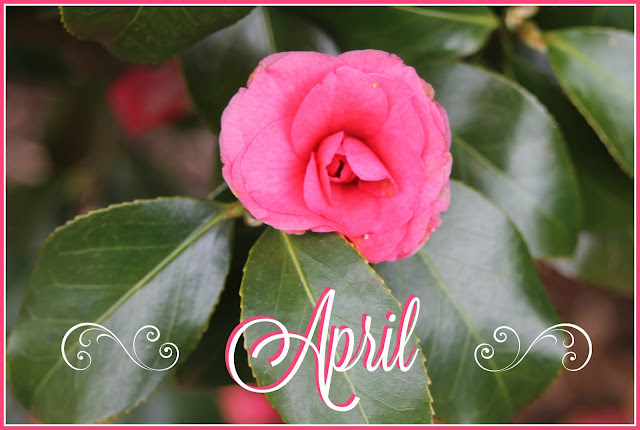 It has been a while since I have gathered the moments here on my blog. Life moves so quickly from month to month and after I missed a couple of months of "gathering," it became a little easier to let it slide. But I really do enjoy marking the moments and looking back before moving on, so when sickness kept me home from church yesterday, I decided to gather some photos and some memories and some thoughts from the month of April.

A group of us were able to visit the former home of my great-grandparents, an amazing house full of artistic details and rich with family history. What an opportunity! 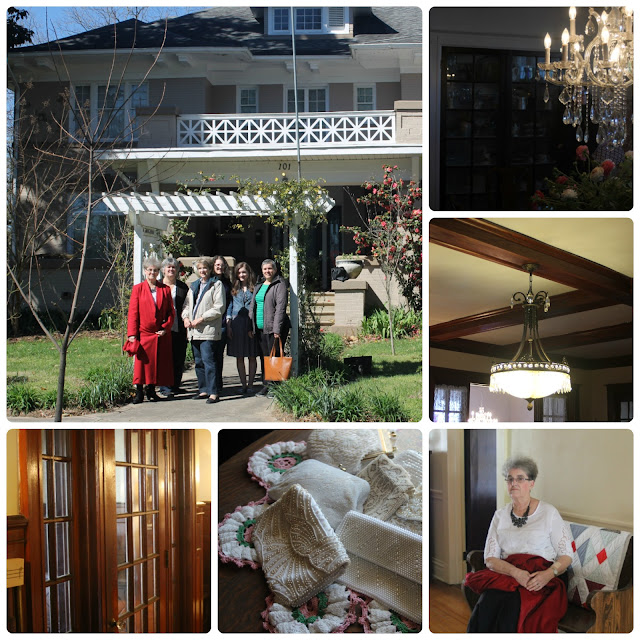 We said good-bye to one of the sweetest kitties I have ever known. He had come to us nearly nine years ago. We just started seeing him around The Farmhouse . . . way out in the fields, away from the house. We would put food outside at the edge of the yard and he would wait until we were back in the house to gingerly walk up and eat it. He was so very timid, in fact, that we weren't even able to touch him for almost a year.

Gradually, he got closer and closer, and eventually he would come into the back porch. (Ron had fashioned a little cat door on both sides so Puss wouldn't feel trapped.) He remained an outdoor kitty all of those years at the Farmhouse. He did not want to come in! Only late at night would he lay just inside the open (it must remain open!) door and allow one of us to rub his belly.

When we planned to move, I knew that we couldn't leave our boy behind, but I was also worried that he would not make the adjustment to living indoors. Every night I'd tell him, "You're going to be a house cat." And he would say (in my imagination), "I don't want to talk about it."

It was an adjustment, but Puss actually learned to love being a house cat! He'd greet me every morning, winding around my legs as I attempted to get his breakfast. He'd stare at us when we ate dinner, hoping for a morsel (or two or three). He learned to be held and cuddle and he even lay in laps!

We miss him and wish that he could have been a house cat for longer, but he was an old boy (not sure how old he was when he came to us, but he only had two teeth left) and we are happy that he lived out his days with us, wanted and loved.

(I didn't plan on telling the whole story here today, but that's how it happened.) 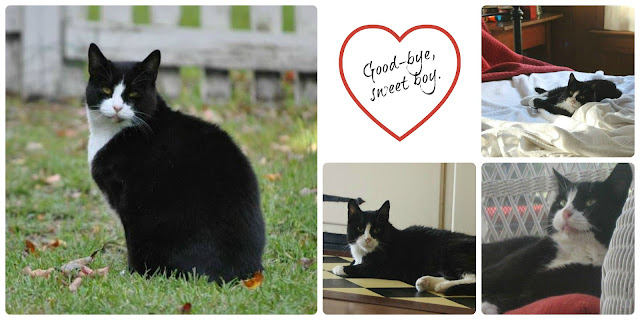 We celebrated Bekah's 16th birthday three times! A celebration with extended family, just the four of us on her actual birthday, and a game party with friends. 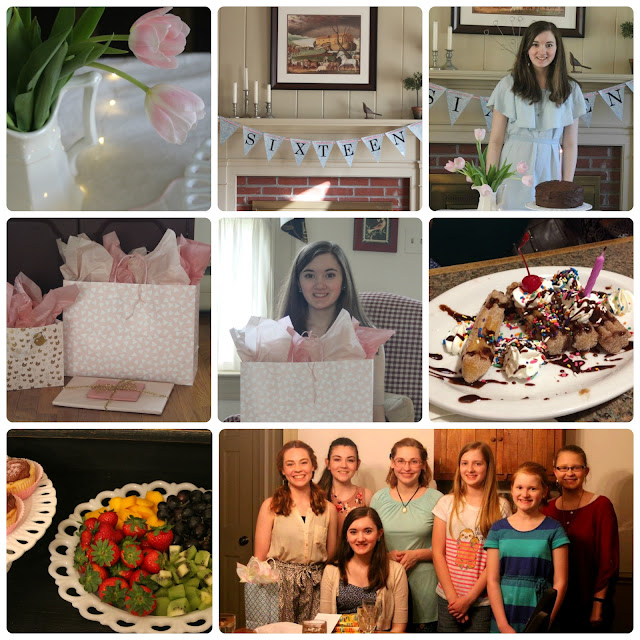 We "sang of our Redeemer" with a Resurrection Day celebration. 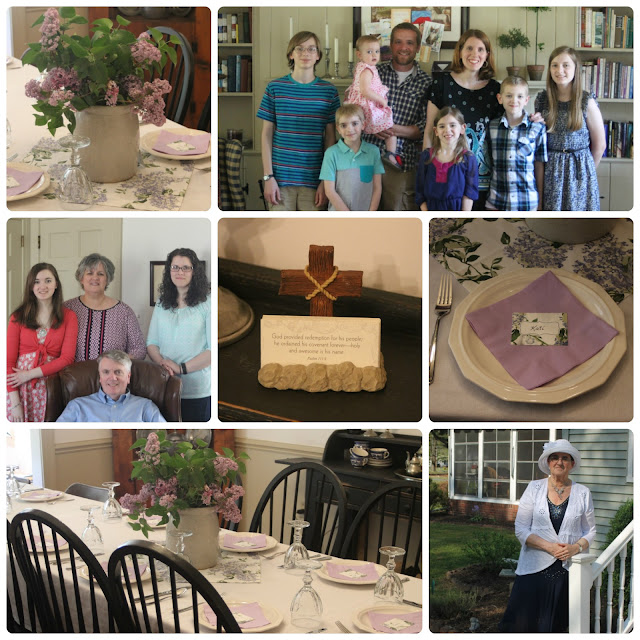 We gathered with family to celebrate the 50th birthday of Michael and Michelle, Ron's youngest siblings. 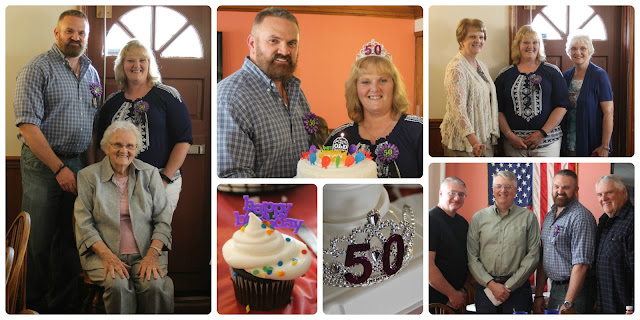 We had a Shakespeare Reading Day. We had ordinary days. A friend brought tulips. We babysat our granddog Lucy while her family was traveling.

We celebrated one full year at Pineapple House! We watched the azaleas bud and bloom for the first time. (They were already in bloom when we moved in last year.)

We worked on the library. We are on the home stretch! (Sneak peek below.) 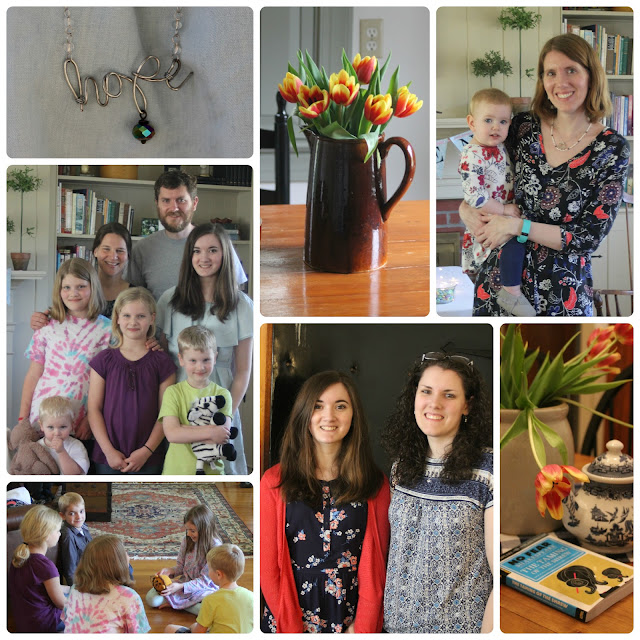 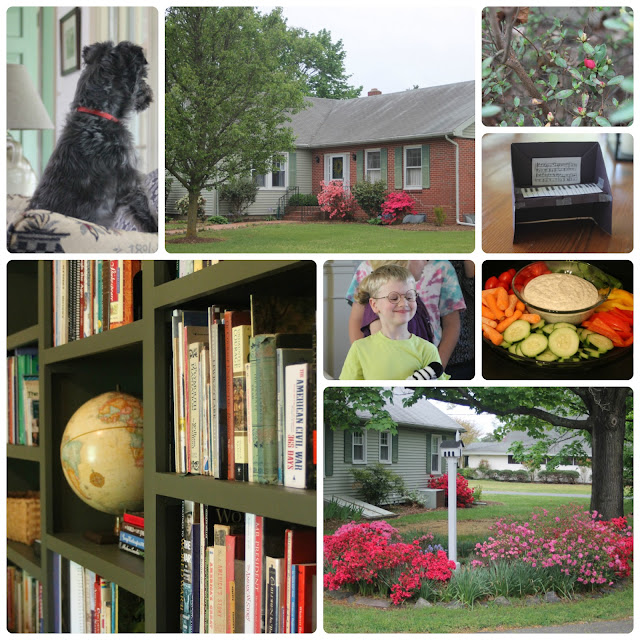 If you're a longtime reader, then you may remember the 31-day series that I wrote on celebrations. Do you remember the definition of the word celebrate that I used?


And I also wrote this:


If our focus is marking the occasion, commemorating its significance, if our hearts are full of gratitude, knowing that everything comes from His hand...then our celebrations will be those of true rejoicing, and not just meaningless exercises in "having fun"!

This April . . . it has been full of celebrations.

Full of the marking of occasions.

Many of them fun and exciting and glorious. Some of them sad and discouraging and even life-changing. (Some are not my story to tell.)

We must continually "tune our hearts to sing Thy praise," knowing that everything comes from His loving hand, and that He gives only good gifts to His children!

We have so many reasons to be grateful!