This week, I returned to The Panera Bread Cookbook: Breadmaking Essentials and Recipes from America's Favorite Bakery-Cafe.   We had enjoyed the Three-Cheese Bread that I made from this cookbook, and I was ready to try my hand at another.

I had decided last week on the recipe that I would try.  I checked the list of ingredients and added golden raisins and cinnamon chips to my grocery list.  Alas, Walmart did not have either of the ingredients.  On Monday evening after work, Ron went on a wild goose chase to a larger grocery store about 25 minutes away from us to purchase the needed items.  He brought home golden raisins, but no cinnamon chips.  For Heaven's sake.

Not to be defeated, I decided to omit the cinnamon chips altogether, and just add some cinnamon to the dough.  After the dough had risen and we had rolled it out into a rectangle, Bekah and I sprinkled on some cinnamon and then rolled the dough up, shaped it into the loaves, and put it in the ceramic baking pans.

Another change that I made was to add a simple glaze after the bread had cooled. 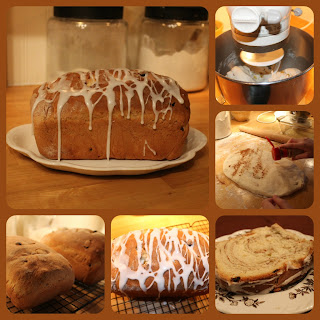 So how did it turn out?

There was certainly room for improvement.  Although the bread had a nice texture and a crusty outside (as did the Three-Cheese Bread also made from this cookbook), the flavor was underwhelming.  Not bad, just not great.  I suspect that it would have been delicious with the cinnamon chips, which would have provided little bursts of flavor throughout the bread.  But in the absence of the chips, I probably should have added more cinnamon to the dough, and probably a little sugar along with it.  After all, I think cinnamon raisin bread should taste like...cinnamon!

As we sampled and reviewed the bread with our evening coffee, I came up with a couple of ideas to remedy these loaves that are already baked.  One thought is to make some cinnamon butter (kind of like the good stuff that Texas Roadhouse serves with their rolls?) to spread on the bread.  I may try this recipe by Ina Garten.

The other thought is to use it to make cinnamon toast for breakfast.  I intend to do just that tomorrow morning.  I'll let you know what I think.