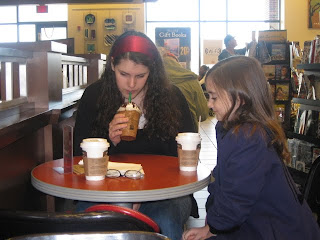 We took time out today for some girl time. Those Starbucks flavors that are only here for the holidays called our names...and we came. Peppermint Hot Chocolate. Peppermint Mocha Frappuccino. Eggnog Latte. A few girly giggles. Okay, maybe more than a few.

The giggles began as I tried to discreetly record the moment via my camera. I said to Bekah, “Scoot into the table a little”...and the man at the table BEHIND me scooted into his table! What do you do? Choice #1: apologize profusely, and try to explain that you were talking to your daughter, and then hope that he thinks that it is quite the normal thing for mothers to photograph their daughters drinking hot drinks at Barnes and Noble. Or Choice #2: ignore his scooting entirely, and hope that the woman at his table has a better view of the situation and explains it to him. (I quickly decided on Choice #2.)

Then as we were walking from Point A to Point B in Super Walmart (which is always some great distance as the “Super” in Super Walmart refers merely to its size...but I digress), we cut through the aisle with floor coverings, doormats, etc. I happened to look over at Bekah, and she had a very unusual expression on her face. Fearing that she might be feeling ill, I asked her what was wrong. “I HATE the smell of rugs!” she complained. “It reminds me of scrambled eggs.” What?! More giggles. (From Kati and me, not from Bekah.)

By the time we arrived at the produce department at the end of our grocery shopping expedition, we didn’t need much to take us over the edge. While Kati went to select a pineapple, Bekah and I were choosing oranges. The navel oranges were quite oddly shaped—elongated, like large orange lemons. Seeing Kati rejoining us out of the corner of her eye, Bekah held up a particularly strange one. “Look at this orange, Kati!” she exclaimed. Only she exclaimed it to the man standing beside me, as Kati had passed by on the other side. I smiled at my fellow shopper, expecting him to see the humor in a little girl’s mistaken identity situation. He didn’t. Which made the whole thing seem even funnier to Kati and me, although we somehow waited for the man to walk away with his oranges before we collapsed into another fit of giggles.
Recounting our day's experiences to Ron over dinner this evening, they didn't seem quite as funny. But we girls had a great time together today...and have decided that it is better to be a bit silly than a bit surly as many Christmas shoppers seem to be. Hmmm.....
Posted by Cheryl

Labels: away from home, stories from home