Oh I suppose that there is a textbook somewhere that would teach us about badgers. Or I suppose that we could do a google search and gather some information. But better still is to glean from what Charlotte Mason called "living books"—those that are rich with ideas and literary language.

On a recent homeschool day, I read to Bekah from The Burgess Animal Book for Children, the chapter about Digger the Badger and Glutton the Wolverine.

"I visited him, but I didn't find out much. He's a regular old grouch. He isn't the least bit neighborly. It took me a long time to find him. He has more holes that anybody I ever knew, and I couldn't tell which one is his home. When I did find him, he gave me a terrible scare. I didn't see him until I was right on top of him, and if I hadn't jumped, and jumped quickly, I guess I wouldn't be here this morning. He was lying flat down in the grass and he was so very flat that I just didn't see him. When I told him that I wanted to know all about him and his ways, he replied that it was none of my business how he lived or what he did, and that was all I could get out of him."

So much learned about the badger in that very first paragraph of the chapter! But it got better.

While reading the chapter from Burgess, we remembered the passage in 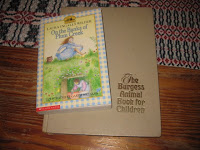 the Little House book, On the Banks of Plum Creek, in which Laura encounters a badger. Although it wasn't a part of the "lesson plans", Kati ran upstairs to get her copy of Plum Creek, and we had an impromptu reading of Chapter 5.

Pa had given Laura strict instructions never to go near the deep shady pool alone, but as she is playing one hot, dusty day, the water keeps calling to her. At first she dismisses the idea, then considers going just to look at it, then considers just wading in the edge of it...then she is on her way. As she nears the water hole however, a mysterious-looking, furry, flat animal is in the path and it snarls at Laura. Frightened, she leaves the swimming hole and runs back home.

But in the quiet of that night, as Laura lies in bed listening to Pa and Ma outside the cabin, Pa playing his fiddle, her conscience begins to prick her.

"Everything was beautiful and good, except Laura. She had broken her promise to Pa. Breaking a promise was as bad as telling a lie. Laura wished she had not done it, and if Pa knew, he would punish her."

"At last Laura could bear it no longer."

Laura crept out of bed and out of the cabin and quietly confessed to Pa what she had done, and told him about the curious animal who had stopped her.

"Then for a long time he did not say anything and Laura waited. Laura could not see in the dark, but she leaned against his knee and could feel how strong and kind he was."

The next evening, after Laura had spent the day being "watched", Ma said to her,

"Tomorrow you and I are going to look for that badger. I am sure that he saved you from drowning, for if you had gone to that deep water, you would have gone into it. Once you begin being naughty, it is easier to go on and on, and sooner or later something dreadful happens."

There. We had begun the lesson learning about the curious badger, but along the way we had seen much more. The beauty of a tender conscience. Pa's kind, gentle strength. Just consequences for disobedience. Laura's submissive spirit in receiving those consequences. The principle that one sin often leads to another.

So many ideas that are powerful and noble and true are found in "living books."