The event sometimes known as the Umpteenth Annual Mother/Daughter Christmas Shopping Trip was this past Friday.  My sister Linda and I have had a special Christmas shopping day with Mom almost as long as I can remember.  Neither of us knows exactly how many, but it has been more than 40 years.  (It makes me feel old even to say this.)  We shop and we eat and we shop and we drink fancy coffee drinks and caramel apple cider.  We ooh and aah at Williams-Sonoma and at Pottery Barn.  We listen to Christmas music.  We walk our legs off.

Sometimes a baby has joined us, or a daughter who has reached the required age of eighteen. Sometimes a new daughter-in-law, or a new grandbaby. Sometimes a mini van full of mothers and daughters, sometimes just the three of us.  This year, we three and Kati made four.


We love this tradition and are thankful for another year of being together.

After the delightful busyness that was last weekend, this weekend was slow.  We eased into Saturday, putting away gifts purchased on Friday, catching up on laundry, doing a bit of cleaning in fits and spurts.  Ron and I slipped out for a while on Saturday evening, to run a couple of errands and to savor some time together, just the two of us, making plans and lingering over coffee.

Today found us on the road to Kristin's house, looking somewhat like the Beverly Hillbillies, as we lumbered over the roads with a bookshelf loaded at an awkward angle and tied down in the back of Ron's pick-up.  It was the partner to this one, and Ron put the finishing touches on it only yesterday. After a yummy lunch (in which Kristin's family made hospitality a family affair!), Ron and Brian brought the bookshelf in and installed it. 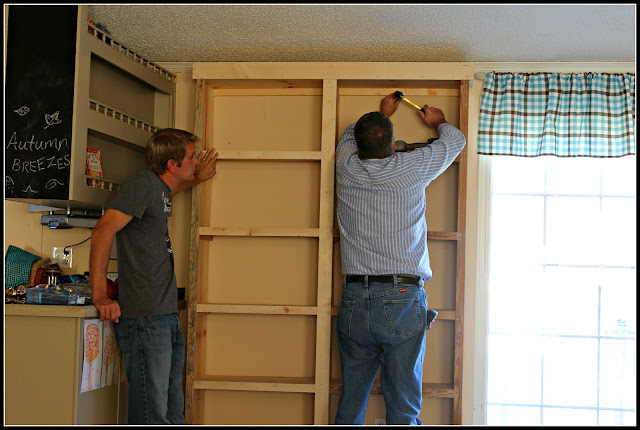 Papa and Alaine enjoyed some togetherness over books.  Take a look at the size of that stack!  I think Papa panicked at first, but Alaine took them over to Aunt Kati after he had read one or two.  Sort of a toddler book tag team.  I took a turn too. 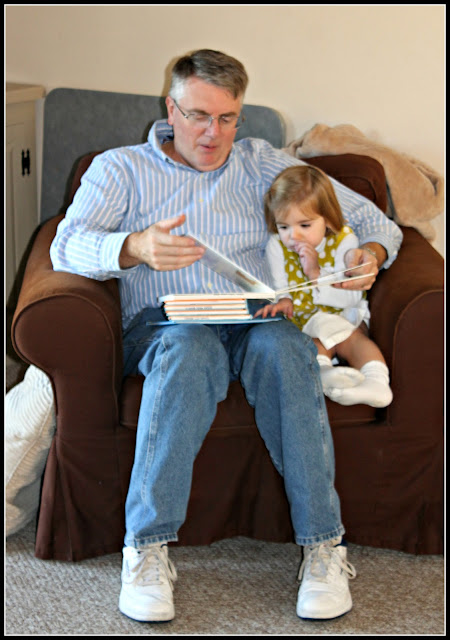 I also enjoyed some together time with four-year-old Ben.  He chose facing pages in his Veggie Tales coloring book for us to color.  I teasingly told him that I thought I'd color Larry the Cucumber in red.

Ben:  "Gran, remember, I'm in charge of this coloring book."


Uncle Max (Ron's brother) and Aunt Pat were invited for dessert this afternoon.  Ben had asked for dessert several times since finishing his lunch.  Brian and Kristin both told him that we were not going to eat dessert until Uncle Max and Aunt Pat came.

When they did arrive, someone saw Uncle Max through the sliding glass door and announced  "Uncle Max is here."  And Ben shouted, "DESSERT!" 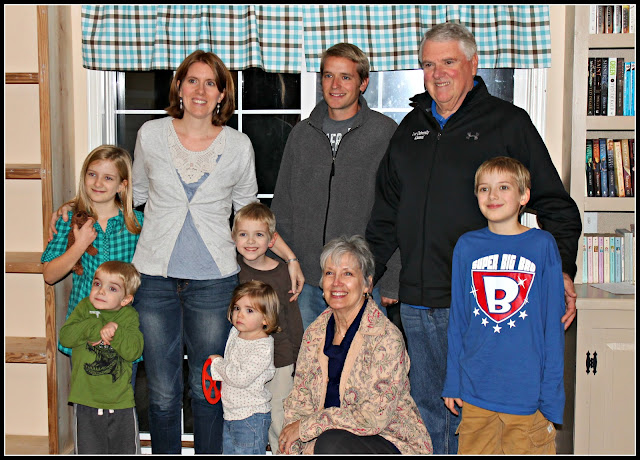 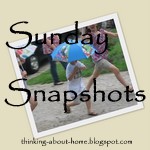