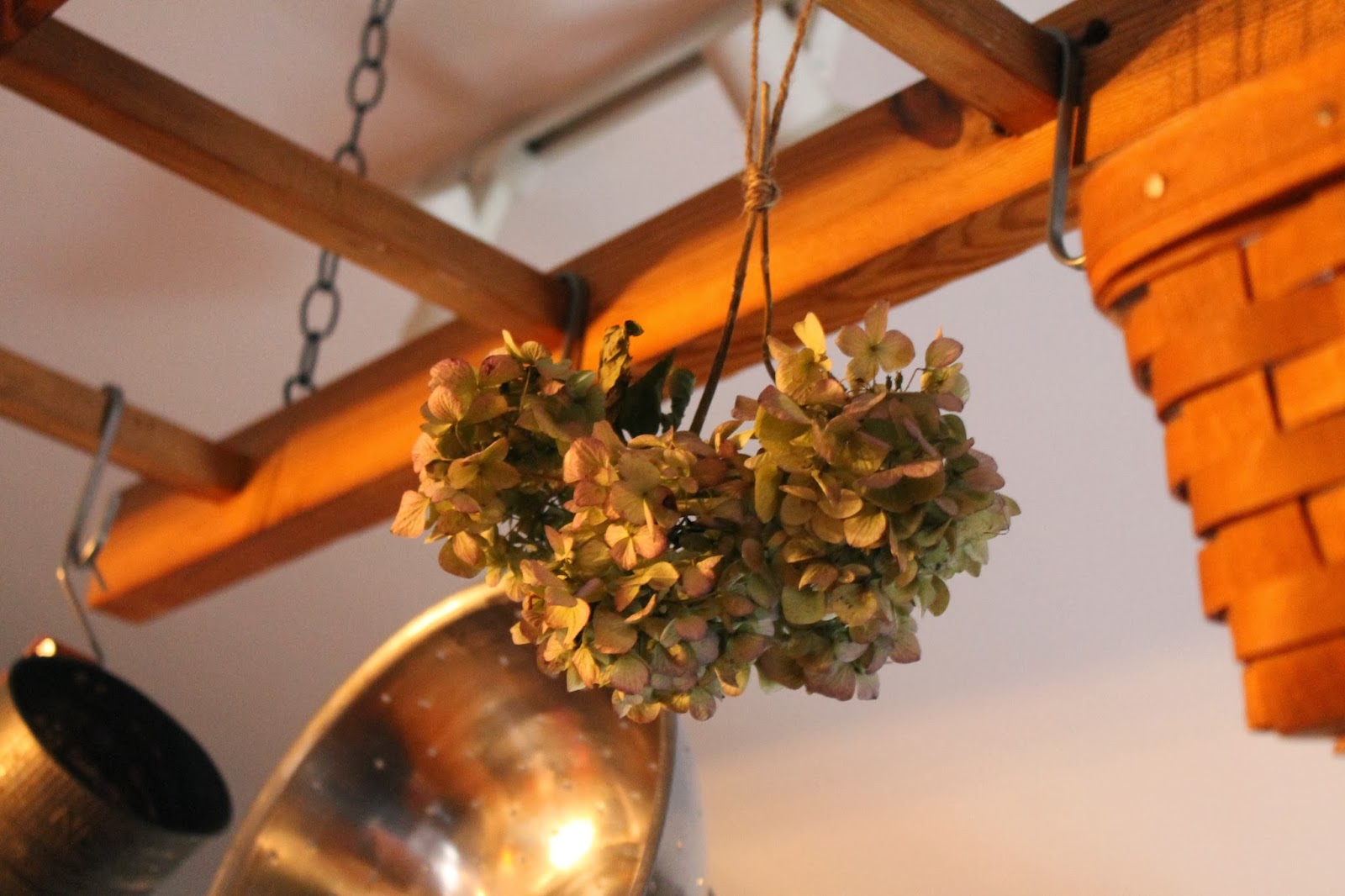 Martha Ellen apparently has a keen eye for detail! When I posted the above photo as part of the Photo-a-Day challenge, she observed in the comments, "I don't think I've seen your pot rack. Did your husband make it?" 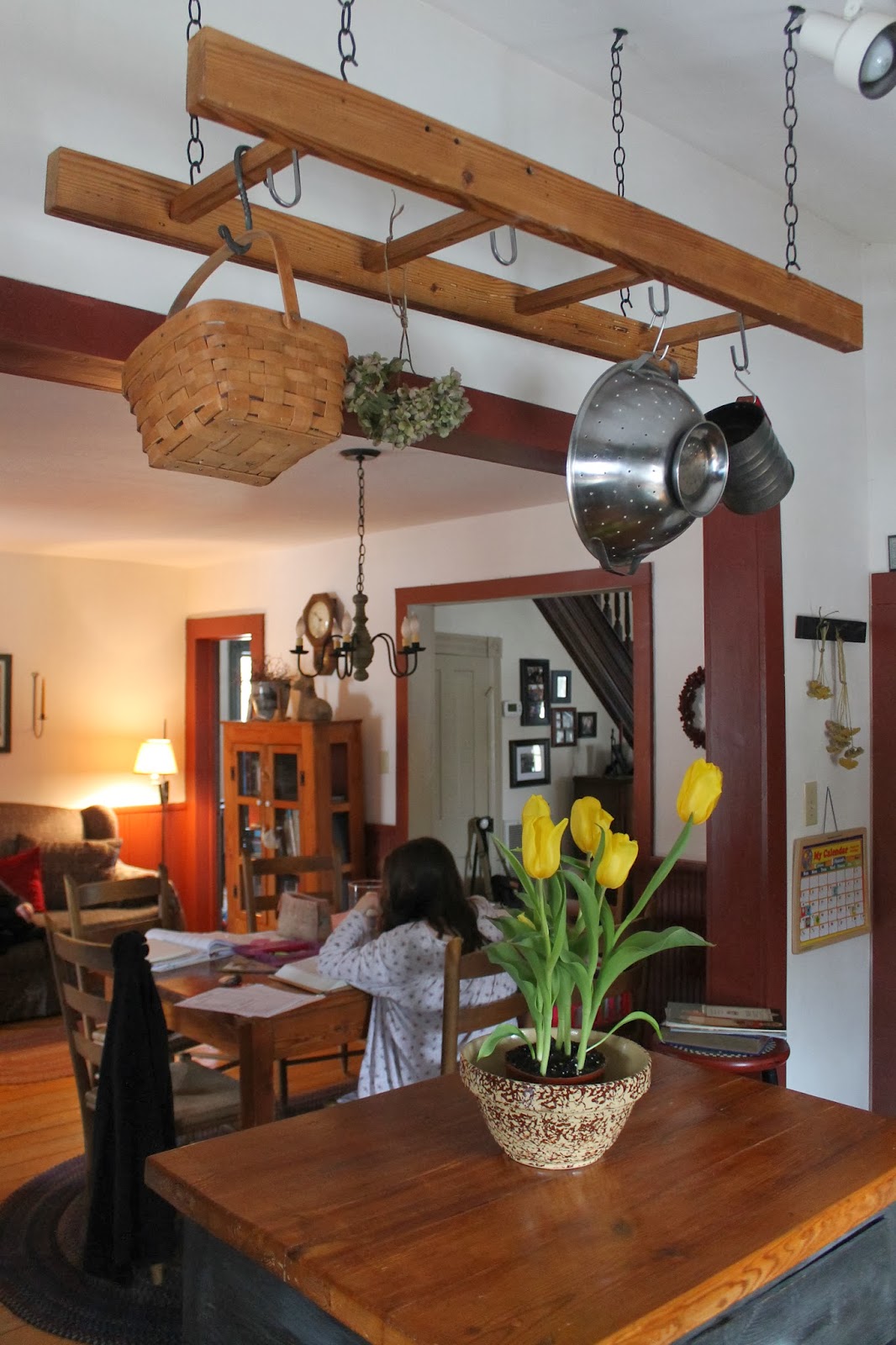 The "long" part is the fact that years ago I clipped an inspiration photo of an old ladder used as a pot rack from a Country Home magazine. I showed Ron and then tucked it aside. Every now and then, I'd come across that photo and mention it again. (Now I can't find that photo, so I can't show it to you.) 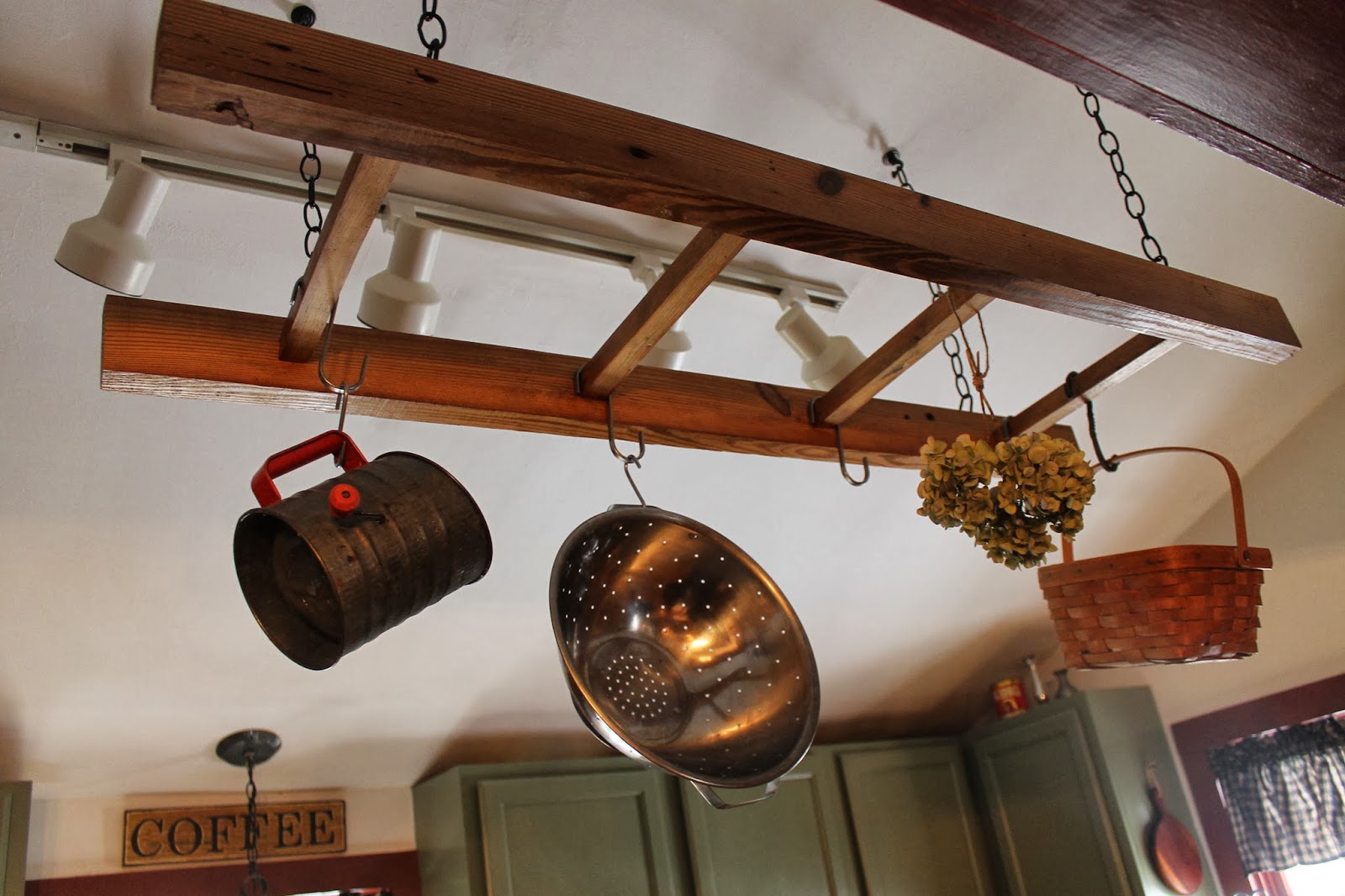 The "brief" part is that Ron took a notion to make his own "old" ladder this past fall. He measured and sketched and he made it in no time.

But...eek! After talking about a pot rack for years, now that I actually had one, I wasn't sure if I was going to like it! What a fickle woman I am. 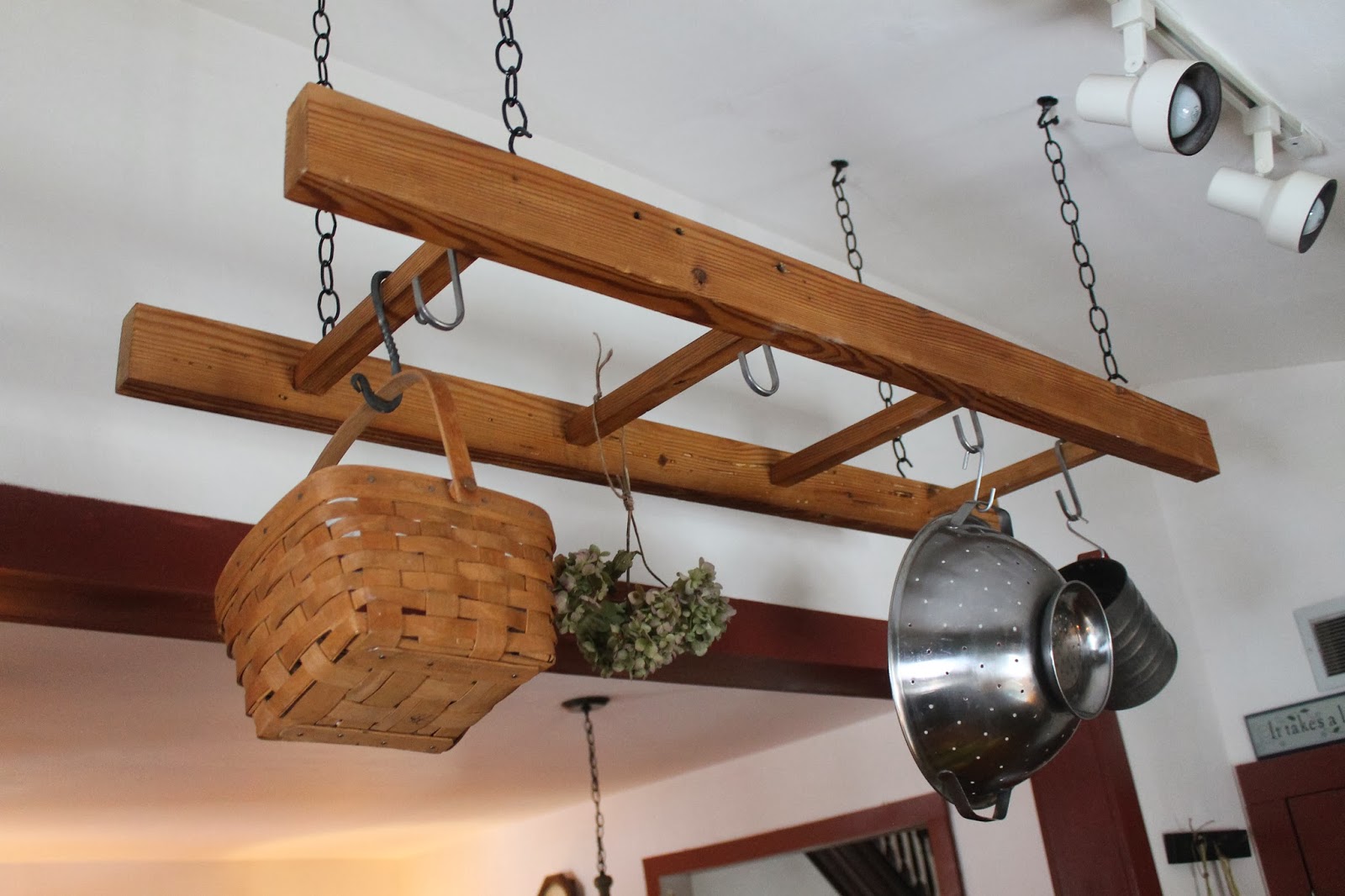 As I have told you, we had a crazy, challenging autumn and holiday season, and the last thing I wanted was something new that I had to decorate and tweak. As you recall, I was also preparing (in the midst of the hubbub) for a house photo shoot, and I didn't want to add another focal piece. What if it didn't look good? What in the world would I hang on it? I tend to use trial and error and thinking and tweaking when I decorate, so I didn't want to have to work with something new before the house photos. So I convinced Ron that I needed to wait until the first of the year to hang it (without telling him that I wasn't even sure I was going to like it!). 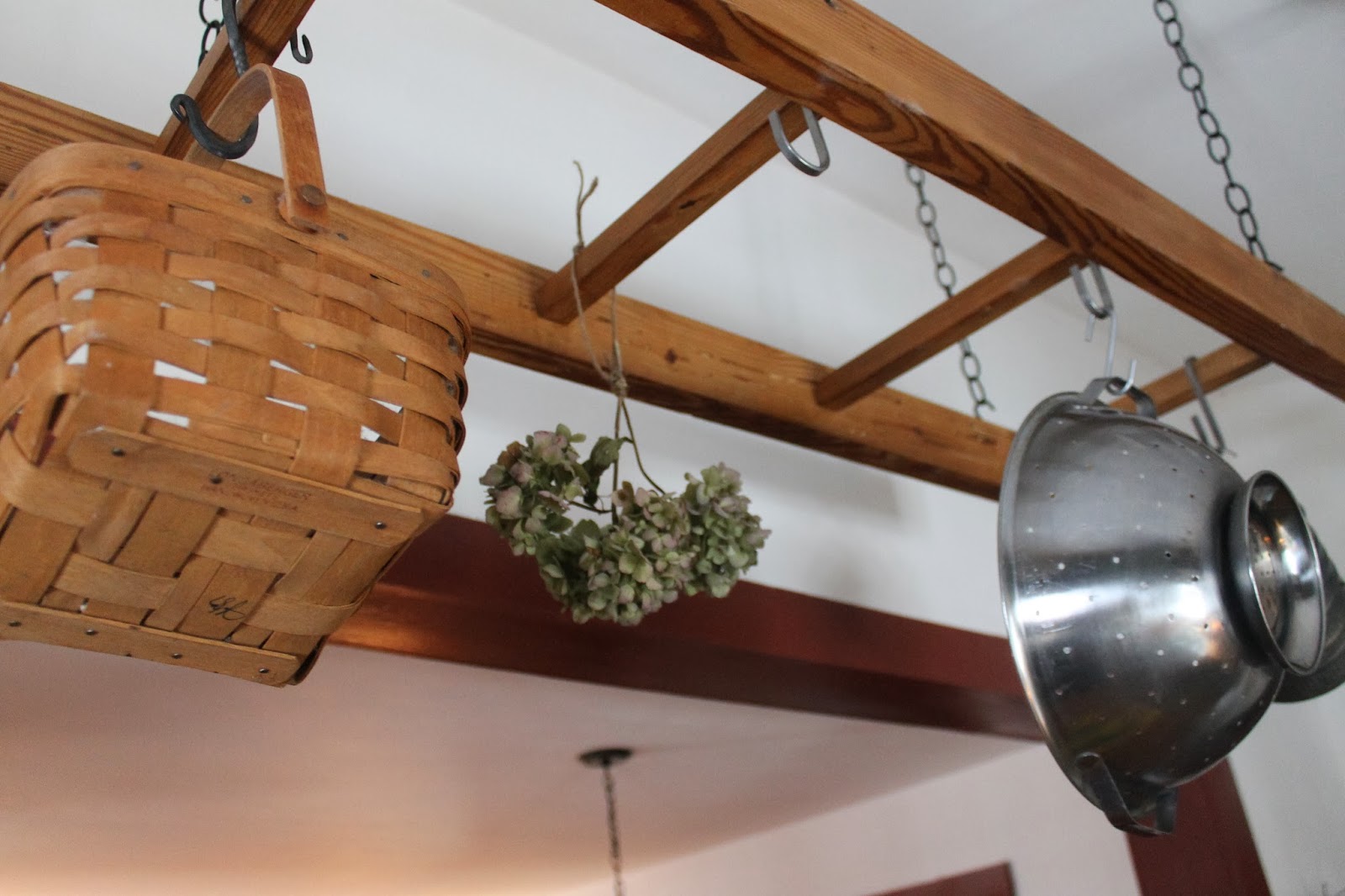 Now that it's here, I love it! It doesn't dominate the space as I feared it would. I think it compliments the new island rather than detract from it.

I still haven't settled on exactly what to hang on it. So far, the pot rack doesn't have a single pot! I like the convenience of the colander hanging within easy reach. But I'm still tweaking, and that's okay now. I feel like I have the mental energy to tweak. (And no "permanent" house photos hanging over my head. Literally.) I have visions of holiday decorating too. There are all sorts of possibilities! 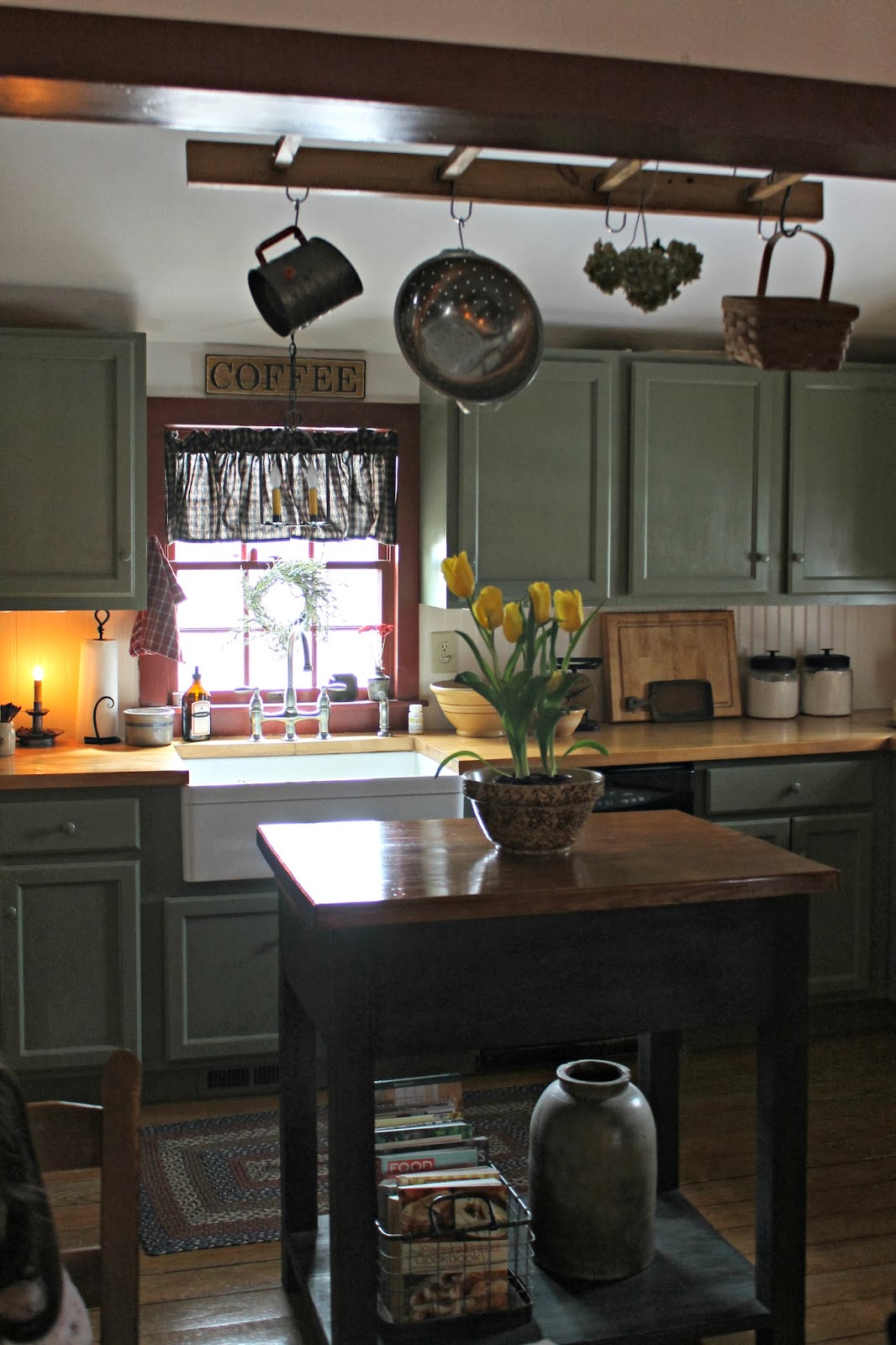 So there's the long and short story of my new pot rack.


Is your house always changing? Are you always tweaking things like I am? Do you think that decorating is ever "done"?
Posted by Cheryl