Autumn was so beautiful this year, full of color and sunshine and pleasant temperatures. Oh, there were many challenges along the way, but also many blessings and we looked forward to gathering with our dear ones to celebrate those and to offer thanks to the Giver of all good things!

We all chatted and made our lists of foods to prepare (although little varies from year to year). House projects were wrapped up. We cleaned and made beds and cooked and made pies. We selected dishes, planned our tables, made place cards, and ironed napkins.

Ryan and family arrived a little before noon on Thanksgiving Day, with plans to stay until Tuesday! Hooray!

Kristin and her family arrived a little after that and the festivities began! 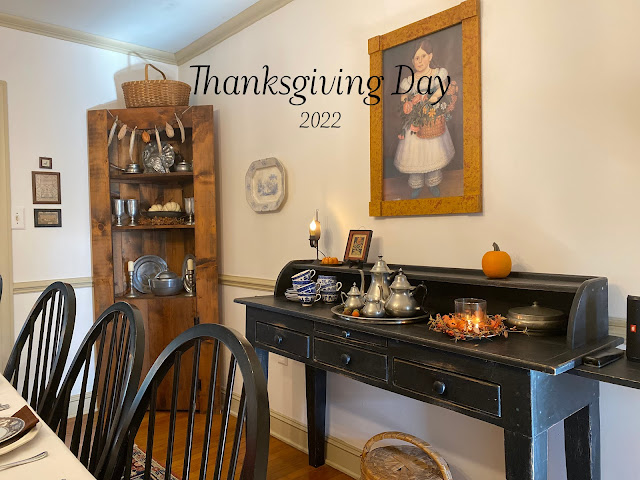 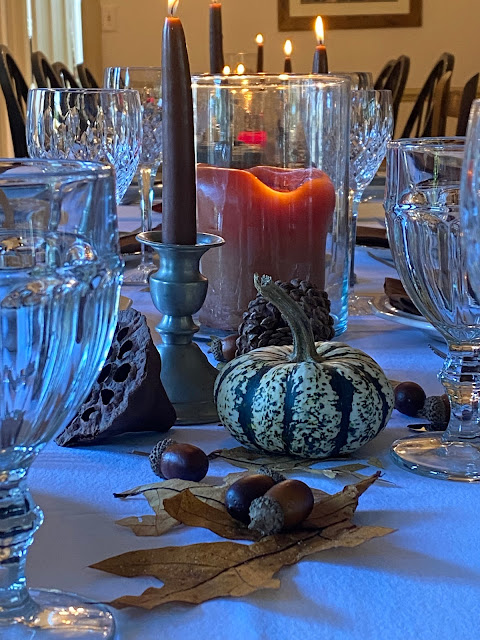 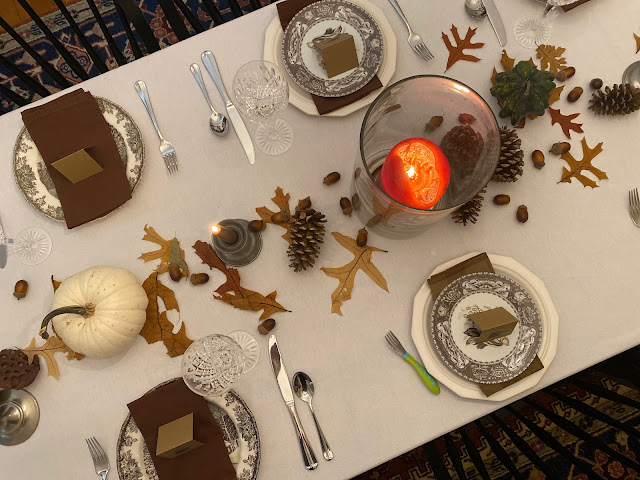 Before the meal, as always, we sang a Thanksgiving hymn together. This year's was "Come, Ye Thankful People, Come." Then Ron prayed a prayer of thanksgiving and our feast began.

Our "servants" this year were Kristin, Bekah, and Eve. (Maddie is usually a "servant" but she was on crutches due to an ankle injury.) Brian also jumped in to help when we needed to speed things up a bit. Our servants bring each dish in from the kitchen and pass it around the table, helping the youngers when needed. I love this tradition. It beats a long buffet line, and it is better than making space for all of those dishes on the table. God bless the servants! 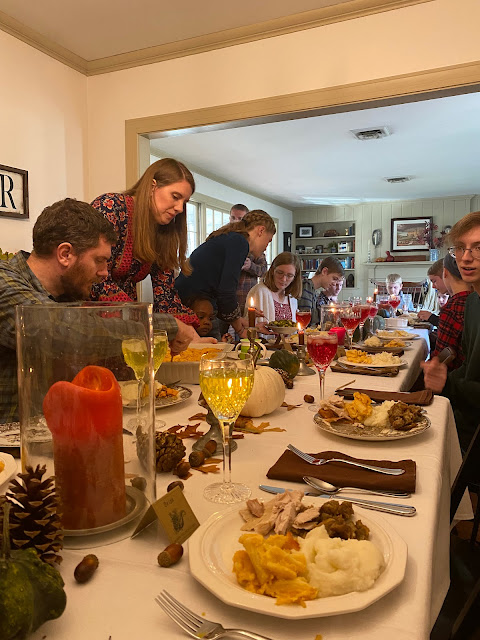 Another tradition, this one begun just a few years ago: the Thanksgiving selfie! 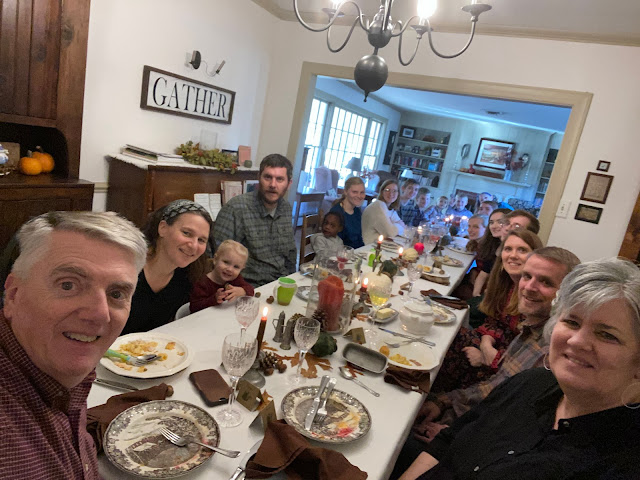 But it's hard to see everyone (twenty at our table this year) in one photo, so we took a couple of non-selfies from each end of the table. 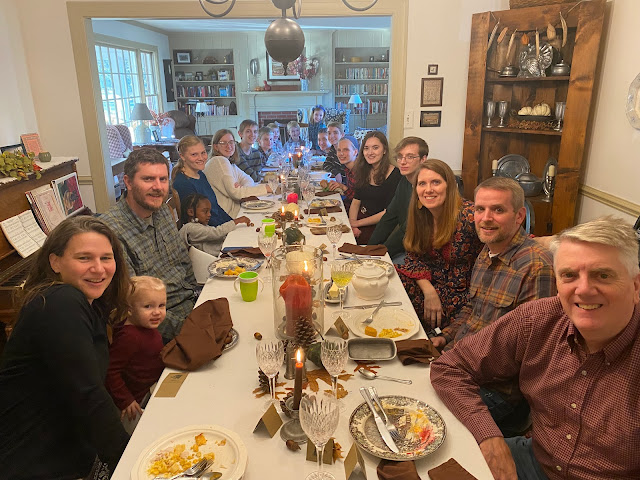 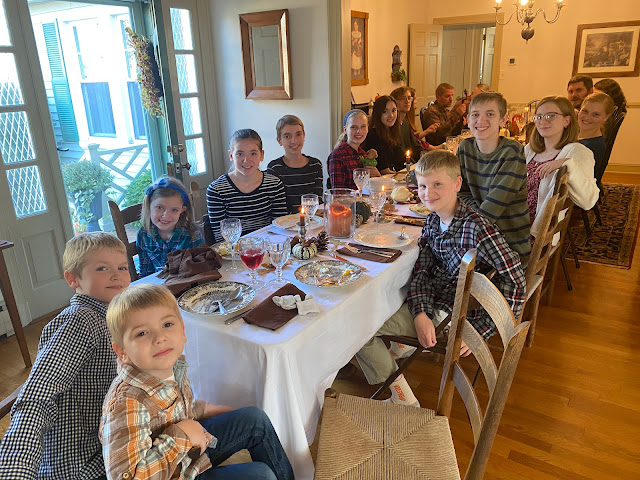 Coffee and dessert were served in the new sunroom this year! 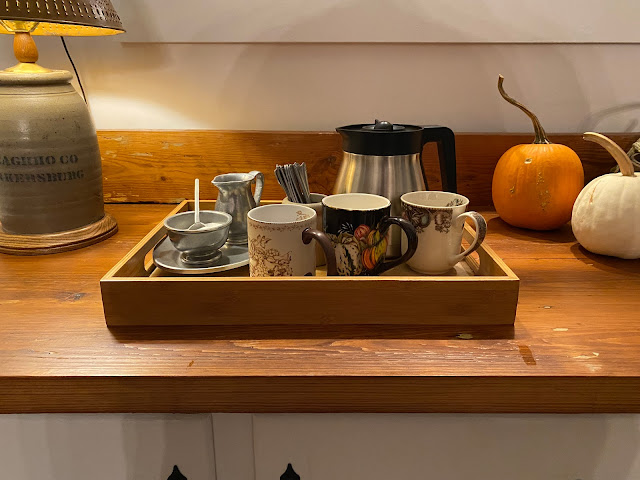 Our grandson Paul was celebrating a Thanksgiving Day birthday this year! Longtime readers may remember that this was the baby who was due to be born as his family was moving from Maine to Maryland and we were all on pins and needles about the possibility that he could be born as they traveled! He was not born on the trip (whew!), but made his arrival just a few days later. And now he's eight! 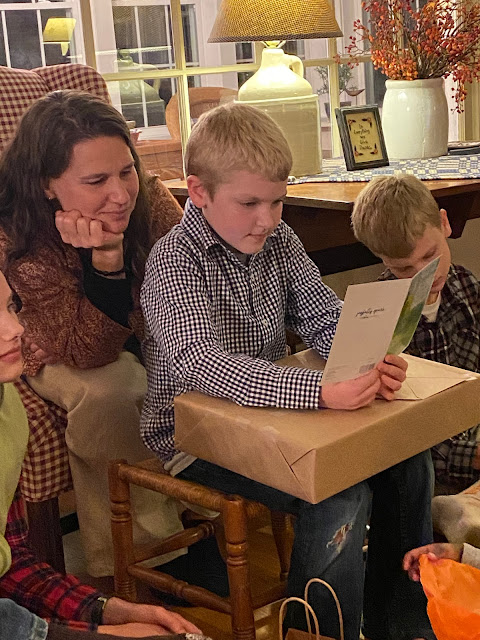 After Paul opened his birthday presents, we all settled in to watch an old home movie that Ron and his brothers and a sister created thirty-some years ago! Some of the cousins (now in their 40's and 50's) were in it too. It was a comedy, originally created as a gag gift for a Christmas party, but it had been added to several times. It was time for the younger generation to watch it! 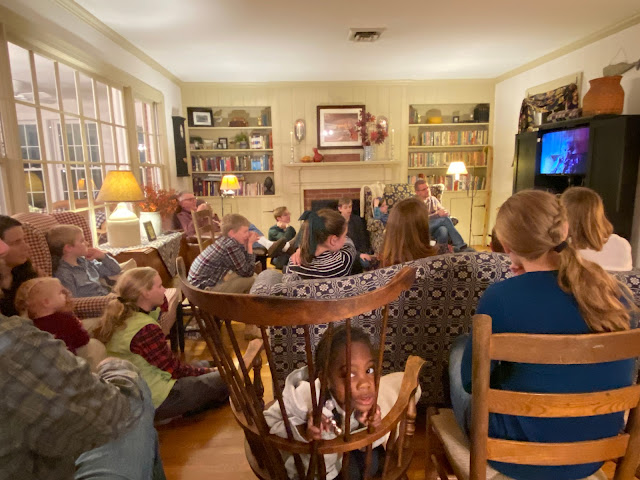 But then . . .
one of the grands started feeling sick and part of our group left.

Later in the evening, Mom called and she was sick and getting sicker. She declined my offer to take her to an urgent care facility or the ER on Thanksgiving night.

On Friday, my sister and I convinced Mom to let me take her to a walk-in clinic. Can you guess what happened? We spent  h  o  u  r  s   there . . . along with a gazillion other people who were sick. (Don't get sick on a holiday weekend!)
Mom was given medication and sent back home to recover. I arrived back at home in time to celebrate Peter's twelfth birthday with some gifts and cupcakes (and leftover pie because that's what happens when your birthday is near Thanksgiving). 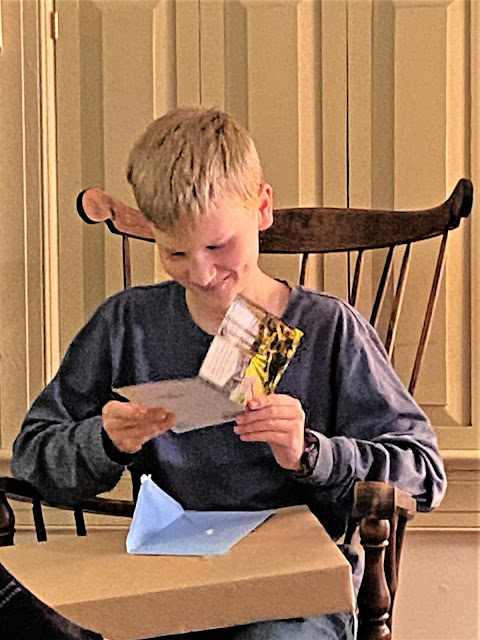 On Saturday, one of Ryan's children woke with a high fever . . . and then people started dropping like flies! Within twelve hours, seven people (out of eleven) in the house were sick. 😱

And thus began day after day of
The only variations were taking temperatures and taking meds.
On Monday night, an eighth person joined the sickies.
In the meantime, Kristin's family was having a similar round of illness at their place.

Our visitors (at least the drivers) felt well enough to travel back home on Thursday, although the fevers returned and they crashed for a few more days after they got home. This virus was a doozy!

I am thankful that I can rest in God's good plans for my life, yes, even when I don't understand the plan.

As we drove home from the walk-in clinic on the day after Thanksgiving, Mom was apologizing to me for taking up my time when I had family visiting and there were plans to celebrate a birthday boy. (That's a "mom" thing, isn't it?) But I assured her that, although it was certainly nothing that either of us would choose, it was apparently part of our assignment for the day.

We talked about how quickly life passes . . .

and how a single day is such a small fraction of a life . . .

and how our one very short life is such a small fraction of the thousands of years that people have lived on earth . . .

and how all of time is just a "blip" compared to eternity!


For our light affliction, WHICH IS BUT FOR A MOMENT,
is working for us a far more exceeding and eternal weight of glory.
II Corinthians 4:17

His plans are preparing us for eternity!

HAPPY THANKSGIVING  in my typical "a day late and a dollar short" way!

MERRY CHRISTMAS as you celebrate this month. I hope to check in with you before it's all over, but no promises!

Now I'm off to finish decking the halls!