No, I'm afraid that post title carries the wrong connotation.  It sounds a bit war-like...and our homeschool is anything but war!  (We're all on the same team!)

What I'm trying to convey is that of learning taking place, almost without the student even being aware.  Although...hmmm...the student is aware, so that's not right either.

I'll give you two recent examples from our homeschool.

I told you about my book find, Twenty-Odd Ducks, the children's book illustrating the importance of punctuation.  What I didn't tell you was that I was so enamored with it that I read it before it ever got home, as I sat in my van waiting for Ron at a doctor's appointment.  I thought that I would read it with Bekah the next day, and that we'd find all of the differences that punctuation had made in the example sentences, and laugh over the hilarious scenarios.

Then I thought better of it.

I decided, instead, to lay the book on the kitchen table and allow her to discover it.  Before dinner, she had picked it up, taken it over to the kitchen love seat, and was reading and laughing.  Every few pages, she'd hop up and bring it to one of us (or every one of us!) and share the funny picture.  She read them aloud.  She described the pictures.

I think she read it three times that evening!

It was so much better for her to relate to the book herself, and enjoy and glean the ideas for herself, than for me to "teach" the book to her.  She "got" it...and she'll remember it.

Another way that we have brought some fun-and-natural learning into our "not school" time is by instituting Game Night.  On Monday nights, while Dad is balancing the checkbook and writing out bills, we have begun to play educational games.  I have accumulated quite a few educational games in my twenty-odd years of homeschooling.  (Did you notice my use of the hyphenated "twenty-odd", as in the aforementioned book? ~grin~)  Some games were ordered to accompany a specific topic of study, some we picked up at museum shops, some were purchased at yard sales.  But there are many of them that Bekah (the youngest...and only student now) has  never played, so we're choosing a different game each week to play with her.

The first Game Night was happenstance.  Bekah took Scrambled States of America from the game shelf and asked if anyone would play with her. 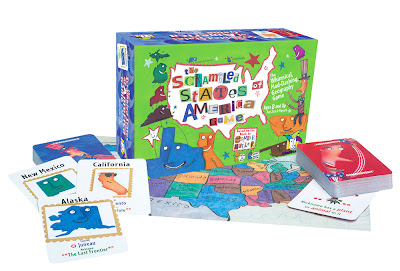 Dad was busy with the checkbook (so not a game!), but Kati and I both agreed to play...and we had a ball!  In fact, she convinced us to play it twice, and another time or two later in the week! And so, I was inspired to make it a regular activity.

One night we played "Presidential Lotto" in which you fill your board with photos of the Presidents as a card is turned over.  We added a twist to that one. Before you could add a President's photo card to your board, you had to give a bit of trivia about him.  If you didn't know any, you deferred to Dad who certainly would.  Another Monday evening, we used a deck of "Quiz Me" cards with questions about famous Americans.

I believe that there is great reward in learning itself, and it doesn't always need to be "fun." However, when there is enthusiasm on the student's part, learning occurs and knowledge is gained rather easily.