I have had a great time with this series, sharing our most recent Special Days with you. Today is the fourth and final part, as Ben's Special Day was the last one this time around.  (You can read any of the previous parts by clicking the links below.) 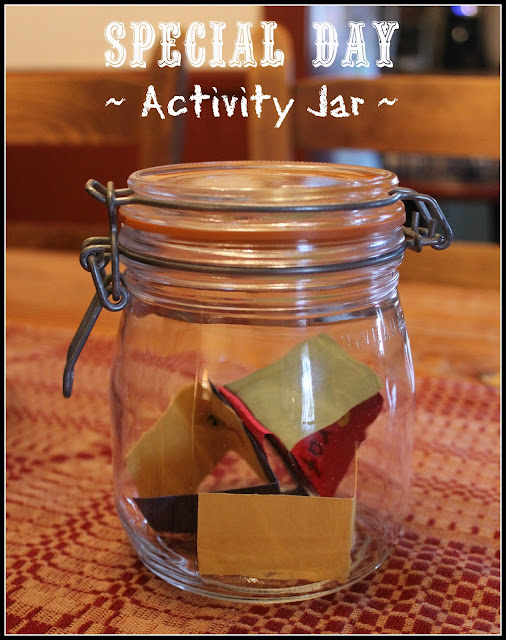 On another cold (and this time ~windy~) Saturday, Benjamin, age 4, had his very first "Special Day" with Papa and Gran.

I had talked with his mama, and we had decided that this first Special Day could be low key--some together time, doing things that 4-year-old boys (at least this particular 4-year-old boy) like to do.  Benjamin himself had just a few requests.  He wanted pizza from "the pizza store" (meaning not homemade), "with meat on it."  And he wanted a "bag of stuff" as his brothers had brought home bags when they returned from their Special Day.

I decided to make an activity jar and fill it with things to do.  Ben could reach in and choose what he was going to do next, which would offer a little structure to the day and also build the excitement. Bekah and I made colorful little cards to go into the jar. We put plenty in, thinking that we'd just keep going until our time ran out, and save the remainders for another time if we didn't use them all.  (Ha!)

The activity jar was an overwhelming success!  Ben loved putting his little hand in that jar and pulling out a fun thing to do.  In fact, I think he enjoyed pulling an activity card out of the jar as much as he enjoyed the activity itself! 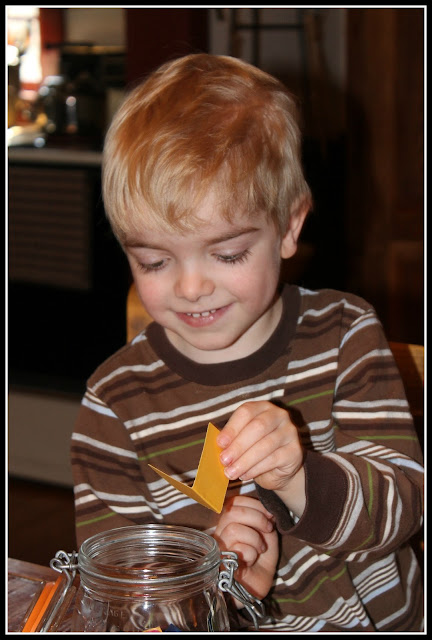 The first card said "Wii."  So into the living room he went with his aunts and decisively told them which game he wanted to play..."Mouse Trap Remix." 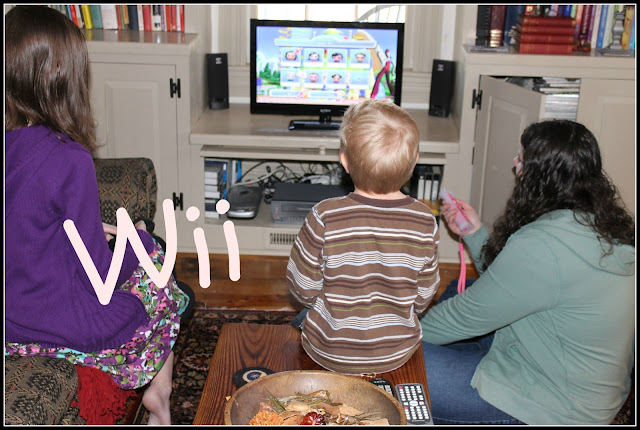 As soon as the game ended, he was back to the jar.  This time he pulled out "snack."  I made him a cup of hot chocolate and put it in my special grandchild mug (the one that says "I love you to the moon and back," a line from the sweet children's book Guess How Much I Love You) and gave him a mini bag of Cheez-Its. 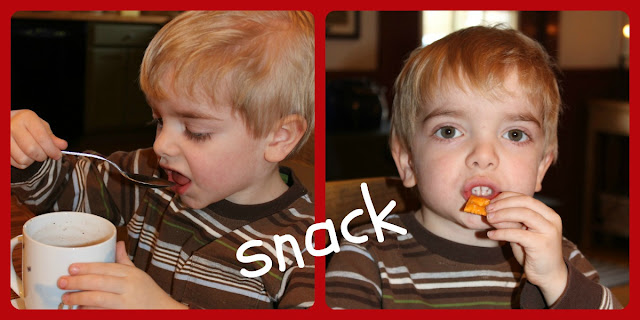 He continued choosing activity cards from the jar, sometimes rushing through an activity so that he could come back to the jar!  We joked that we'd have to take him home by lunch time, because we were running out of things to do.  ☺

Here are some of the things he did... 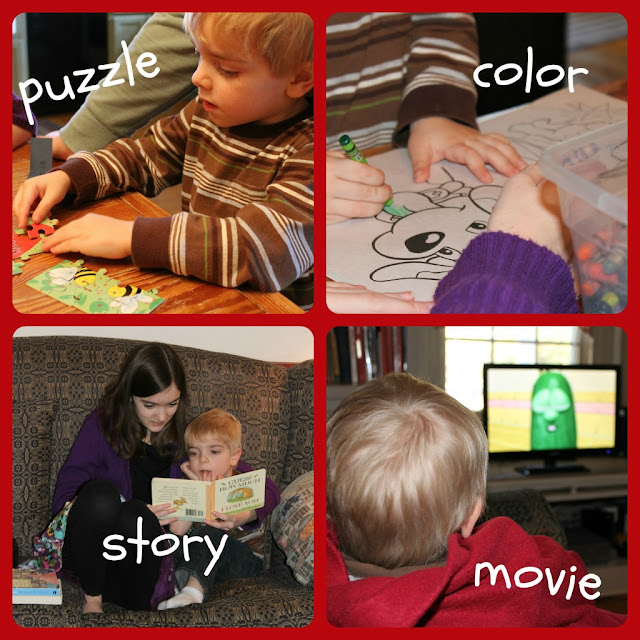 One of Ben's favorite activities was what we had labeled "candy hunt," but what he renamed "Candy Land."  This was Bekah's idea.  While I entertained Ben upstairs, she and Kati used brightly colored construction paper to lay out a Ben-sized game board throughout the house.  On some of the spaces, they had written special instructions ("go back two," "take a giant leap," etc.).  Then they gave Ben a large rubber die to roll and determine how many spaces to step.  A bag of candy was hidden in a basket at the end of the course.  I suppose it is great fun for a four-year-old to be a part of a life-sized game! 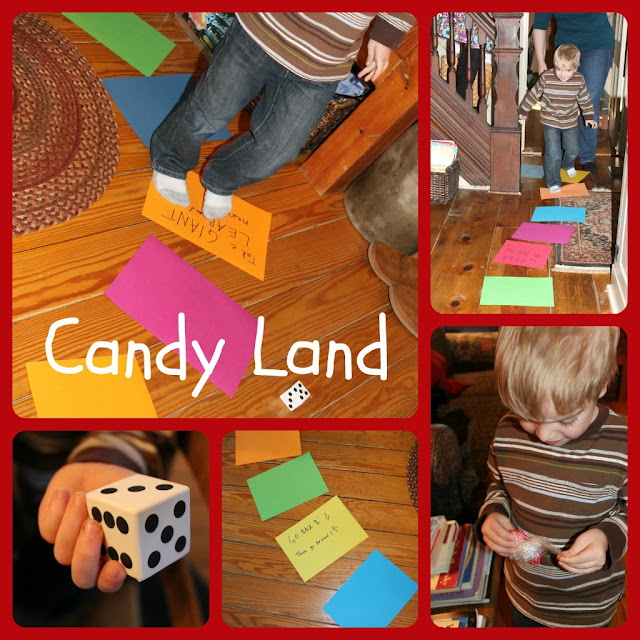 We also had to make a last minute switch.  Originally, Papa had planned to take Ben on a wheelbarrow ride through the woods.  But it was soooo cold and windy, we thought that a better plan would be for them to go out for ice cream.  (Ben was none the wiser, as the switch was made behind the scenes.)

Bekah went along too (Ben's request), and she reports that on the way to get ice cream, Ben was already talking about choosing another card when he got back. Funny boy! 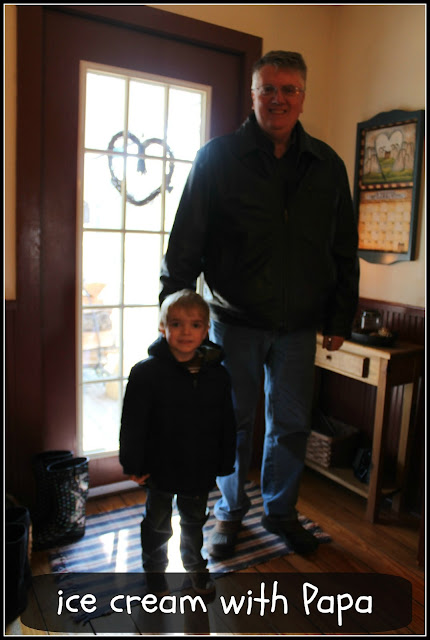 As you might have already guessed, we did run out of activities before we ran out of time. (Kristin was going to pick Ben up after dinner.)  But we just recycled some of the favorite activities, and came up with a couple of additions, and we kept him busy until dinner!

As promised, Ben received a "bag of stuff"!  I had purchased a set of Duplos from Target's clearance shelf after Christmas (is anyone shocked?).  Since the brothers had brought Legos home in their bags, I thought that I'd tuck the Duplo set into Ben's bag, along with some other treasures including a bug pencil, an Angry Birds note pad, some alphabet stickers, and a coloring book. 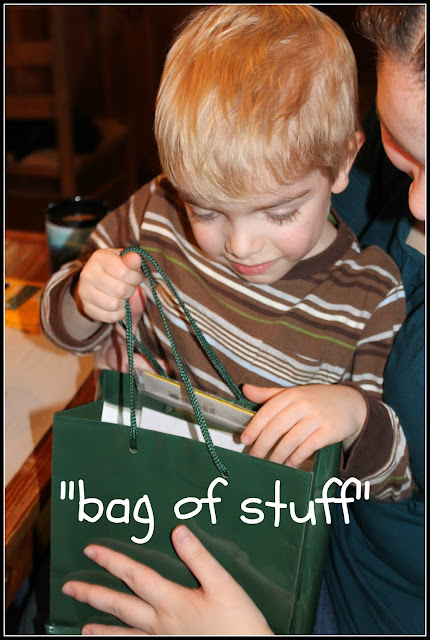 We ate our pizza store pizza...with meat on it... 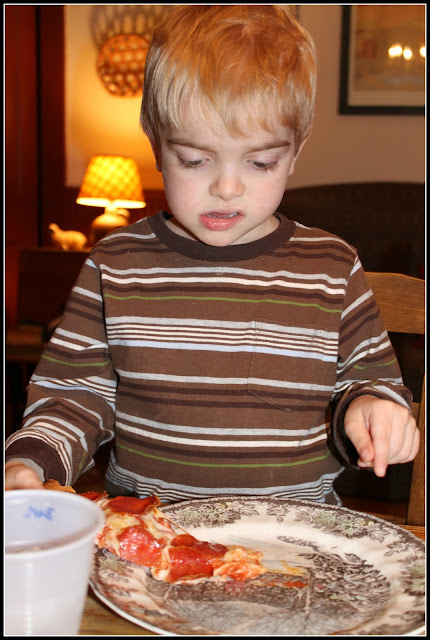 ...and then Ben played some games with Bekah until his mama came to pick him up. 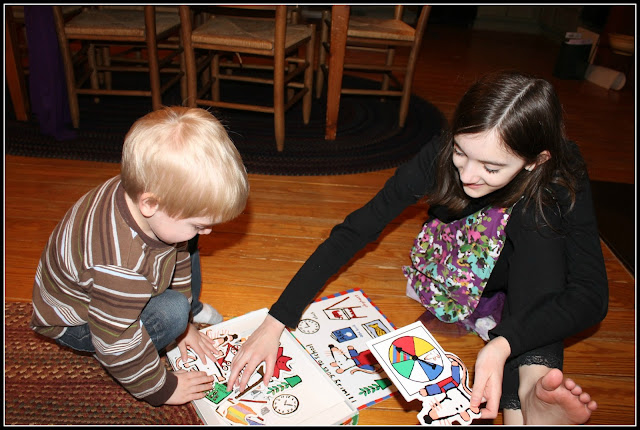 Ben's Special Day was the simplest one that we did this time around.  But I don't think either of the children enjoyed their day any more than Ben did!

Posted by Cheryl
Labels: at home, grands, stories from home