This week, Bekah moves into the world of double digits.  Yes, my baby, the youngest of my four blessings, is ten years old.
Here is a Polaroid that someone in the delivery room snapped, only moments after she was born...
﻿﻿﻿﻿﻿﻿
﻿﻿﻿﻿﻿﻿

...and here is our girl today, our gift of love, having grown in years and in beauty (both outside and inside). 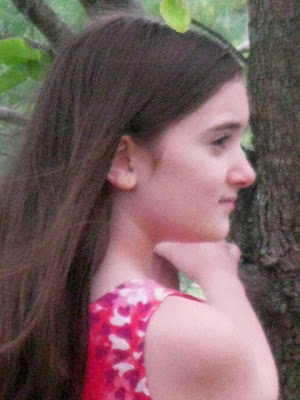 We thank God that Bekah is a part of our family, and we pray that she will continue to grow in His grace and His love.

For those of you who don't know the marvelous story of our Bekah, I share my post from last April:


For many years, we hoped for another baby, another child to love and to live and to grow with. And then we found out that she was coming at the very time that we would not have chosen ourselves. It was after I had had a very serious illness, and was on multiple long-term medications. And I had just turned forty.


So then we hoped that this little gift within would make it. Not only were there real concerns about the effects of the drugs I was taking, but I had had a middle trimester miscarriage five years earlier and that fact caused apprehension. Then I had complications in the pregnancy, including one dark day when I hemorrhaged so badly that my OB doctor assumed that I was miscarrying, but sent me for an ultrasound to confirm before performing a D & C. Imagine my elation when the baby’s heartbeat sounded loud and clear! So we kept hoping.


I’d like to say that we hoped for nine long months, but on a Sunday morning seven weeks before my due date, my water broke, and I spent six days in the hospital hoping that she would stay put a little longer, hoping that her little body would be ready to enter the world a bit early. Then labor was induced, we learned she was in breech position, and Bekah was delivered by C-section at 9:22 on a Friday night. After giving our tiny girl a quick examination, the neonatologist turned and gave us a thumbs-up sign and we breathed a big sigh of relief.


Bekah spent the next ten days in the NICU, and then came home with an apnea monitor, and then had difficulty gaining weight, but by the end of the summer, she was the plump little baby in the beautiful smocked dress at her big sister’s wedding!


So today, our little “hoped for” Rebekah is nine years old and we are rejoicing. She is beautiful, bright, tenderhearted, opinionated, musical, talkative, artsy, indecisive, feminine, delightful—a true joy to our hearts and our home!

For this child I prayed, and the LORD has granted me my petition which I asked of Him. Therefore I also have lent [her] to the LORD; as long as [s]he lives [s]he shall be lent to the LORD.” I Samuel 1:27,28
Posted by Cheryl