The astute reader will notice that Owen is wearing different shirts in these photos, because I am truly sharing Sundays (two Sundays) Snapshots today.
Games are often a part of our Sunday afternoons.


There are many game enthusiasts in our midst, perhaps none more enthusiastic than our grandson Owen (4).  He is ready to play a game at the drop of a hat.  Actually, he is kind of "dropping hats" in this Berenstain Bears card game (picked up at a yard sale when Kati was a toddler) where the object is to collect the four bears and their matching head gear.  This is a picture of a happy boy. 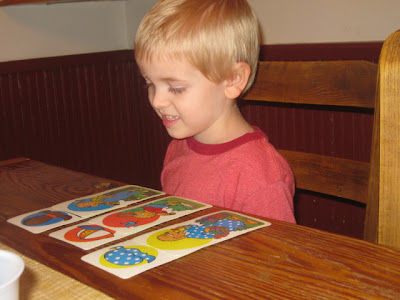 At lunch today, the children were planning some outdoor activities, but as soon as the meal ended, dark clouds rolled in and it began to rain.

"Our plans are ruined," moaned one child.

Small shoulders drooped and faces fell, until Kristin reminded them that they had brought a favorite Wii game and extra remotes to Papa and Gran's house today.  The moans turned to squeals as they skipped into the living room and played Monkey Ball for most of the afternoon.  (Bekah and Gavin played all afternoon.) 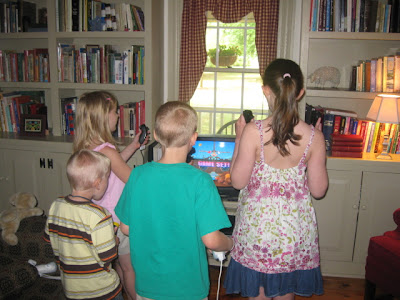 But lest you think that the children have all the fun...not so.  We are all a little competitive too (with the exception of Ron who, when coerced to join a family game, always roots for the person who is furthest ahead so that the game will end sooner).

Here we are playing Dutch Blitz.  (Ron refuses to play this one.)  The picture is a little blurry, partly because our photographer moved...but mostly because there is some fast-and-furious competition going on here!  (Check out the arms!)  My gentle, quiet Kati is transformed into a wild woman when playing Dutch Blitz.  Think elbows and fingernails and bent cards.  You would not know her.  She almost always wins (which only reinforces her wild behavior) and I am almost always last.  (This game is not for the slow.  Which I am.) 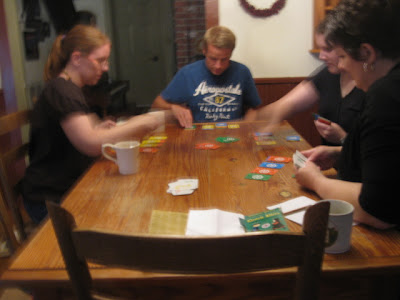 Usually, we end up playing Apples to Apples as evening nears.  This is the one that we usually coerce Ron into playing (we know he really loves it in his heart-of-hearts)...and often one or more of the children jumps into the game and plays on an adult's "team."  Don't you think Kati had a sweet little "team" this evening?  I do. 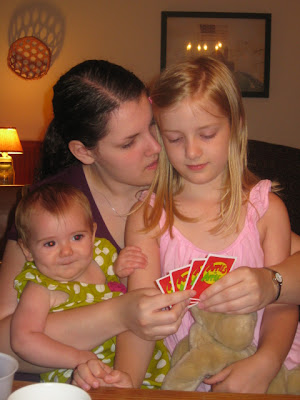