When we first got married, we would often have the TV on at dinner time, watching the news or some favorite show.  But somewhere along the line, we made it a policy to turn off the television while eating.  After all, how can you have great conversation, share family stories, tell about your day, focus on one another, when the TV set is competing for your attention?  (And compete it does!  Have you ever watched people in a restaurant or a food court when a television is present?)

Instead, play some pleasant background music.  Or even get crazy and have no sounds at all except for the voices of those at your table. 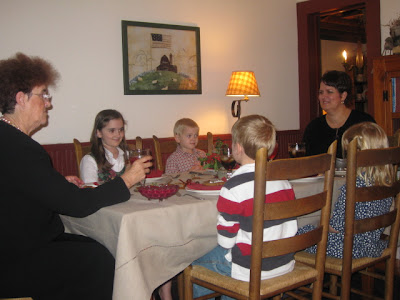 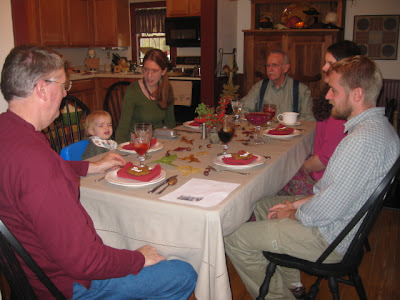 1)  In our modern age, I'd have to include all technological gizmos in with the television.  Let the answering machine handle phone calls.  Turn off all cell phones.  No texting.  No blackberries.  No computer.  (Did I leave anything out?)
A few years ago, we had taken a day trip and had stopped to have a nice dinner on the way home.  At the table next to ours in the restaurant was a young man and his wife and their two small children.  During the entire meal, this man handled business on his cell phone, sometimes at the table, sometimes outside.  What he did not do was connect with his wife or his children.  Now maybe this was not a typical pattern for him.  Perhaps there was a business emergency that needed his immediate attention, and most nights he chatted and joked and was with them.  But I left the restaurant that night sad for his wife, sad for his children, and sad for him.  They all missed an opportunity to be together, for although he was present in body, he was not there.
2)  I am thinking that there are exceptions to the "no TV" rule.  There are occasions when the movie or television show is the event.  We eat  pizza every Christmas Eve while watching "The Homecoming."  Your family might eat chili while watching the Super Bowl.  But most of the time, the mealtime itself is the event.
Let's eliminate distractions from the main event!  Mealtime connections will make your house a home.
:: :: :: :: :: :: :: :: :: :: :: :: :: :: :: :: :: :: ::

Labels: 31 Days to Make a House a Home, at home, home musings