If your children are small and you have begun to think about school choices...or if your children are in a traditional school and they spend most of their day outside of the home (and a chunk of the time they are at home doing homework)...
Consider homeschooling. 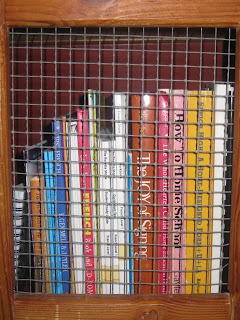 My older two children were in the 6th and 4th grades when we (finally) decided to take the path of homeschooling.  I had considered it for several years, but didn't think that I could do it.
I was a nervous wreck.  Even though I was convinced that the Lord wanted us to do this, and I even became enthused about it, I thought that it meant the end of my "freedom" and the beginning of a difficult task.
So wasn't I surprised when I found that (in some ways) it was easier?  No longer were we pulled apart, spending the greater part of the day in different places. No longer did my children need to follow the agendas of other people (and not the people who loved them).  No longer were we slaves to the schedule that someone else had set, nor were we slaves to their ideas.

By the end of our first week of homeschooling, I knew that we had found our way.  It was God-centered.  It was home-centered.  Our family worshiped together, prayed together, tended our house together, learned together.  We had become a team.

Bringing our children home to school was one way that we made our house a home.
(Oh...and that "freedom"?  I never missed it!)

More of my musings about home education...
A Lesson in Abundance
What's the Goal?
Posted by Cheryl