Pavlova is an elegant summer dessert.

A popular holiday dessert in Australia, pavlova is named for the Russian dancer Anna Pavlova. It consists of a very light meringue layer, topped with whipped cream and fresh fruit, usually some kind of berries. (We have made pavlova with strawberries for Mother's Day a couple of times.)

This week, I thought I'd get a jump on Fruit on Tuesday. I made the meringue part of the pavlova on Monday evening while preparing dinner. (First mistake.) After dinner, the girls and I went out to run a couple of quick errands. Before we left, I peeked into the oven, saw the golden brown meringue, and declared it a success . I propped open the oven door, per my recipe, and out we ran.  (Second mistake.)

An hour later, we were back home. I was ready to whip the cream and assemble the dessert, but when I retrieved the pavlova from the oven, it had fallen and was sticky.  Definitely underdone.

This morning, I had another go at it. As I gave it my full attention (not making dinner this time), I realized that I had omitted two-thirds of the sugar last night! I had only put 1/3 cup...totally missing the part about adding the remaining sugar 1 to 2 tablespoons at a time. Hello.

As it baked this morning, I did a little internet sleuthing.  Some sources said to leave the oven door fully closed after the meringue is browned, not leaving it ajar as my recipe had said. So this time, I kept the oven door closed, and left the meringue in all day.

Take 2 was a success! 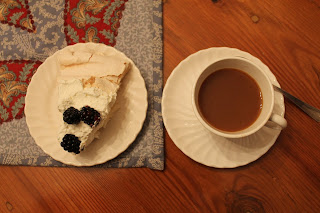 That is, it tasted good. Delicious, even.

The presentation, however, could stand some improvement.

The meringue did have several cracks. And my internet sleuthing showed me that pavlova is taller (looks more like a layer cake in shape), not as low and wide as mine. Look at the lovely shape of this one...


Oh, but it was good!  So good, in fact, that I am willing to make a third attempt should the occasion arise.


Have you ever had a dessert flop?  Did you try again?