Who has time to chat on Christmas Eve? Do you? I don't either, but I'll jot down a few thoughts and you can read and run...or come back and read later...or just skip it altogether! No obligations! 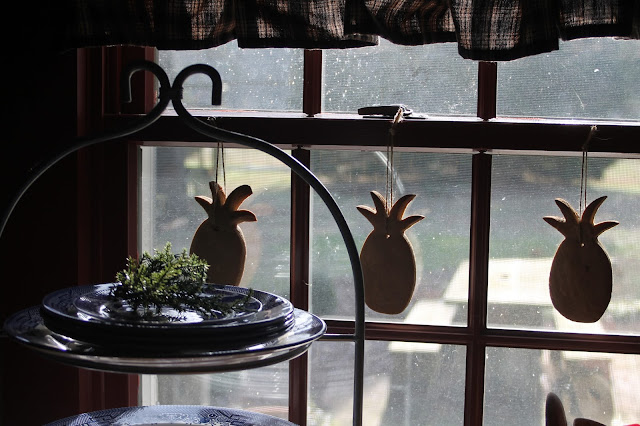 First the medical news. After more than eight weeks of IV antibiotics (six of those weeks at home), Ron has completed his course! On Monday morning, he returned to the hospital as an outpatient to have his central line removed. Praise the Lord!

He is released to return to work on December 28, although his first real day back in the office will be January 5 due to a previously scheduled week of vacation.

Oh, it was a busy day yesterday! The house needed cleaning before our gathering(s) on Christmas day. Not a deep clean, mind you, but it had been a while since some areas had even been touched. So the four of us pitched in to tidy, dust, mop, and vacuum, upstairs and down.

After cleaning, the girls and I had a big wrapping session. (As in, only a few gifts had been wrapped before yesterday.)

Right after dinner, I began to make a batch of cookies. Ron was doing dishes and handing me ingredients as I was tossing things into the Kitchen Aid mixer. I stopped the mixer to scrape down the sides and while the beater was raised the switch turned on! (It is a little loose after all of these years of use.) Oh no! I quickly reached to turn it back off. In my haste, I actually turned it up higher! Oh no! Cookie dough was flying! After doing battle with the switch, I finally got the mixer turned off. Cookie dough was all over the counter. Cookie dough was on my clothes. Cookie dough was on the floor. Later, I found a blob of smashed cookie dough on the floor cloth in front of the kitchen sink. After the cookies were all baked and put away and the kitchen was cleaned up (I thought), I found another blob of cookie dough on the tea pot on the stove. Good grief.

I admit to having had a few meltdowns these past few weeks of stress and too much to do. But, amazingly enough, the cookie dough incident made me laugh.

Today, we will cook and get ready for Christmas breakfast and for our Christmas buffet. We typically have a quiet Christmas Eve at home, but this year we are going out to hear our nearby grands sing in a children's choir at their church's Christmas Eve service. We can't miss that! (I hope the monsoon has passed by then! Yikes!)

My sister posted this photo on her Facebook page. Here we are at Christmastime, 1964.
(I feel old as I type that!)

I'll leave you with this...

(Would you like to read the lyrics as you listen?)

In the first light of a new day
No one knew He had arrived
Things continued as they had been
While the Newborn softly cried
But the heavens, wrapped in wonder
Knew the meaning of His birth
In the weakness of a baby,
They knew God had come to Earth

As his mother held him closely
It was hard to understand
That her baby, not yet speaking,
Was the Word of God to man
He would tell them of His kingdom
But their hearts would not believe
They would hate Him, and in anger
They would nail Him to a tree

But the sadness would be broken
As the Son of life arose
And the Firstborn of creation
Would ascend and take His throne
He had left it to redeem us
But before His life began
He knew He'd come back, not as a baby
But as the Lord of every man

Merry Christmas to all of you, my dear blog friends!
As we celebrate His first coming, may we prepare for His second coming!