Amazing What You See While Running Errands 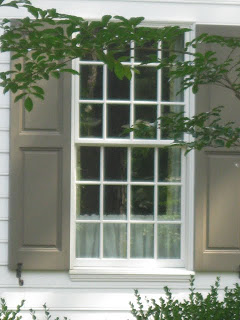 Earlier this week we were running some errands in town, and had a bit of time to kill between appointments. Never ones to miss out on an opportunity (insert sheepish grin), we headed to Dunkin Donut for some iced coffee. While sipping my mocha-java deliciousness, I decided that we would take a ride around town and admire some of the older neighborhoods.
I adore older homes in established neighborhoods. Now Ron is totally against living in any neighborhood--he is a rural man all the way. But I grew up in neighborhoods, and can imagine myself living in many of these older homes--ones with interesting architecture or an octagonal window or a wide inviting entryway or masses of shrubbery and flowering plants or windows with many panes of wavy glass. Ahhhh....
As we meandered, several homes begged to be photographed, so we slowed down as we rode by, rolled down the window, focused...and hoped that no one would peer out of those wavy glass panes and report a stalker! 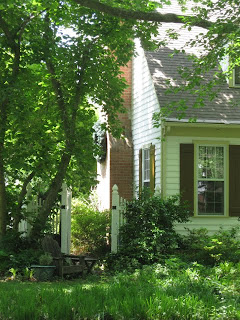 Kati loved the inviting gate opening into the garden,
and named this one The Secret Garden House. 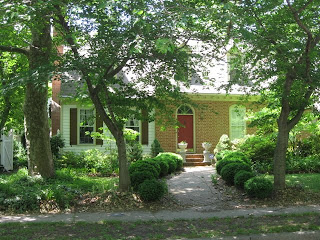 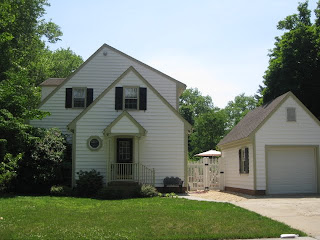 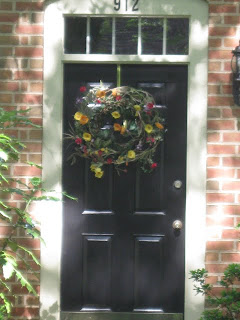 Love the transom windows, the black door, and the gorgeous wreath! 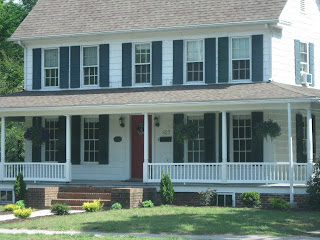 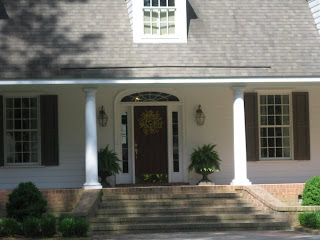 Sweeping entry (and another beautiful wreath)

Okay, get ready to change channels. (And, Mom, stop reading! Yes.)
Later, our errands were completed and we were driving home. We were at a stoplight, getting ready to turn onto the highway, when out in the road—in the road, people...on the dual highway!—stood a man! The traffic was stopped at the time, but nevertheless, it is not everyday that you see a man standing in the middle of the highway! He was holding a plastic grocery bag and a long stick. What?!
Sleuths that we are, we quickly deduced his purpose for standing somewhere between life and death. There was a l-o-n-g snake (Kati says it was a kingsnake), also defying death in the middle of the highway. And the man was desperately trying to get said snake into the plastic bag and off of the highway. Oh. My. Goodness. He was poking at the snake with his long stick, trying to encourage it to move toward the median (which the snake did not think was a good idea). Then the man would attempt to lift it onto the stick so he could put it into the plastic bag (another idea that the snake did not like). And then, the light turned green and the traffic began to flow again, while man and snake continued their struggle in the road and large vehicles swerved to avoid running over the man.

In the meantime, I am frozen, still at the intersection, and, despite my total aversion to snakes, I cannot take my eyes off of this terrifying scene! I am wondering what kind of idiot will risk his very life to rescue a snake...and at the same time, I find myself rooting for the idiot! What is wrong with this picture?

After what seemed like hours (while I probably missed a few right-turn-on-red opportunities and frustrated the motorists behind me), my light turned green and I knew I had to proceed. At this moment, the rescuer had managed to wrangle the snake near the median, he himself was on the curb, the snake was dangling from the stick, and it was heading toward (although not without a lot of wriggling) the bag. The girls were able to keep watching a bit longer (as they were not driving), and they think that the snake was eventually bagged.

As I finished the journey home, I thought about this man's act. I certainly would not have risked my life for a snake. And then I thought that what this man did was not so unlike what Christ did for me. I was ugly, not worthy of His favor and mercy...but He gave His life for me.
~ ~ ~ ~ ~

For when we were yet without strength, in due time Christ died for the ungodly.
For scarcely for a righteous man will one die: yet peradventure for a good man some would even dare to die.
But God commendeth his love toward us, in that, while we were yet sinners, Christ died for us.
Romans 5:6-8