The One and Only Owen

In the midst of the August birthdays, our sweet grandson Owen turns four. 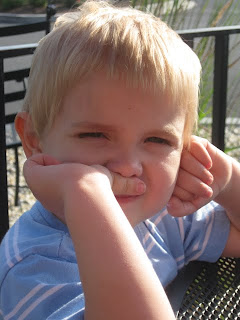 Have you ever known a child who was afraid of flamingos...or sunscreen? He doesn't like crowds, even large family parties. He is loathe to eat anything that has color. (White foods are just fine, thank you. And brown—if it's chocolate!) He is sensitive to noise and to smells. Owen and his Aunt Bekah (who probably understands him better than anyone else does) can even identify different pieces of silverware by their smell!


Owen likes consistency and predictability. He craves order in his life. He needs to know what is next. If he is going to Sonic on Friday night, he can tell you on the previous Sunday afternoon exactly what he is going to order.


Although Owen is quiet (we accuse him of trying to conserve words), he loves words and can already read and spell a bit.

His favorite activities are watching movies (he recently told his mama that he thought the movie theater would make a nice place to live) and playing games. Owen played games at a younger age than any child I've ever known. Before his second birthday, he mastered Storefront Bingo that we had bought for Maddie's fourth birthday—learned the names of all the items in all six shops, from the c-clamps in the hardware store to the fez in the hat shop, and insisted on being the caller. 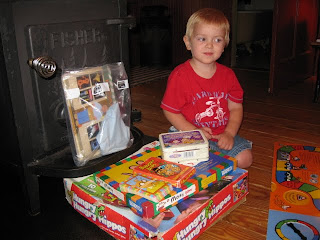 That's our Owen...a delightful, unique blend of talents and quirks and total loveableness!

In the movie version of Anne of Green Gables, Matthew and Marilla are at the train station watching Anne depart for school at Queens Academy. They are reminiscing about the events that brought Anne to them.


And we love Owen for who he is...and we thank the Lord for blessing our family with him!
Happy Birthday, sweet Owen!
Posted by Cheryl