"There are no small parts, only small actors."
Mrs. Armstrong
If you've ever read The Best Christmas Pageant Ever by Barbara Robinson (we have read it aloud countless times!), you might recognize the above quote by Mrs. Armstrong.  She says it every year as she assigns parts in the church Christmas play...and the children have no idea what she's talking about.
This year, we had our own host of "small actors" who presented the Christmas story in the farmhouse kitchen.  Actually, we had a pageant last year too (you can see it ~here~), but this year the acting troupe kicked it up a notch as they had newly assigned roles, new script, and new costumes.  (We were told the "director" was Gavin.  But whenever there was a glitch, the actors called "Bekah!"...and Bekah was seen rewriting script, Bible in hand, all weekend. ~smile~) 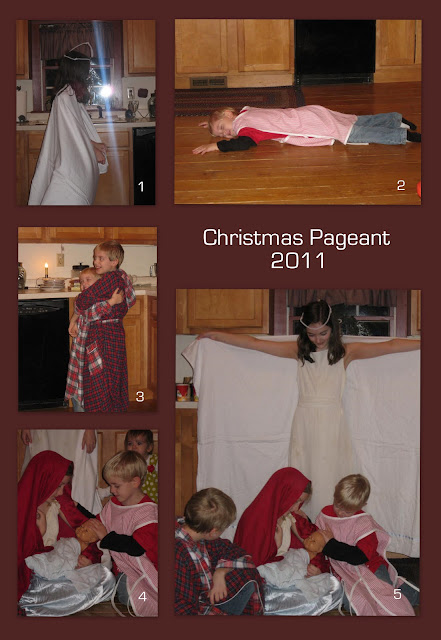 And the audience loved it!
Posted by Cheryl