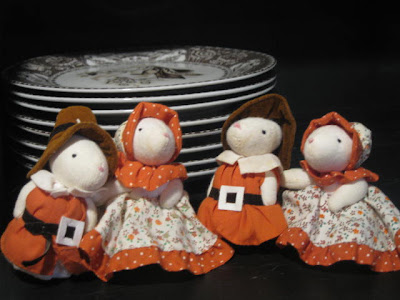 These dear little mice fall under the category of "new" heirlooms.  They are not antiques, but they have become treasures as the children have played with them from year to year.
My mom bought a pair of these Thanksgiving mice years ago.  I oohed and aahed over them so much that she bought me a pair the next year.
Mom is like that.  You're almost afraid to admire anything.  She'll either buy you one, or give you hers.  In this case, she did both, because a few years later, she gave me her own pair, and now I have all four little Pilgrims.
The children have played with the mice for many Thanksgivings.  They are as expected as the turkey and stuffing (and perhaps enjoyed more).  I learned recently that they are not mix-and-match--there are definite pairs of husband and wife mice.  (Apparently only discerning eyes can tell them apart.)
Bekah and the grands played with them last Sunday while the adults were lingering at the table.  It was reported that (horrors!), the boys were making them "modern mice" with elevators and a toilet and a playground with a slide and a sandbox.  The girls were not cool with that.
I was also informed this year that we need another mouse.  Since Benjamin is old enough to play mice now, there are not enough to go around.  But an internet search was fruitless, so it appears that the children will have to share the tiny Pilgrims for now.
Posted by Cheryl