I spent most of last week at home with a sick child.  I spent most of the week before that at home without transportation (my vehicle was in the shop).
I have told you many times that I am a homebody, so being "stuck" at home is not a great imposition to me; in fact, I quite enjoy having "at home" days.

There's only one problem.  Life goes on regardless, so when all is well, there is a lot of catching up to do!  That's where I have been this week...in the Land of Catching Up.  The Land where there are piano lessons to make up and school projects to catch up on and groceries to purchase and various and sundry errands to run.  It was a good week, a productive week, but one which did not allow me a lot of computer time...at least during the times when my brain was awake.

Bekah has a birthday coming up in a few weeks.  It is hard for me to believe that my youngest will be eleven years old.  When she was born, it felt like I was starting all over.  Kati was seven, Ryan was in college, and Kristin was working and engaged to be married!  But all of a sudden, this baby is going to be eleven and she is wearing a size 6 shoe and she keeps growing taller and she likes to help me cook and she teaches me things on the computer and reminds me of things I said and relates to me the cute things her nieces and nephews say and do.
Yesterday, one of our errands in the Land of Catching Up was a library run.  The usual parking lot attendant is an elderly man who is always grumpy.  Always.  He only speaks if you have a parking fee (which isn't often, since you can park two hours with no charge), and then he grumbles the amount.  So we were suprised when a different attendant greeted us with a warm smile and a "Have a nice day."
Kati remarked, "It doesn't take a whole lot to make you feel like it really is okay to come to the library and park in the parking lot."
"Yes," I concurred.  "The other man makes you feel like it's a cardinal sin to park here." 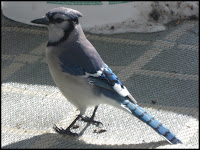 Bekah jumped into the conversation.  "Why isn't it a 'blue jay' sin?  Blue jays do more sins.  They're the ones who steal eggs from other birds."
Of course, we all laughed.  I realized, however, that she wasn't hearing the term "cardinal sin" and reacting with a child's understanding.  This was different.  She was taking a bit of knowledge, using a play on words of sorts, and intentionally making a witty comment.
Yes, she is growing up.  I will no longer be able to tell you stories of all the cute things she says, as I did when I first began blogging here at Thinking About Home.  I must respect her need to be free to express herself without fear of ending up starring in a blog story.  (She is always saying funny things though, and is usually generous about letting me share them.)

Speaking of Bekah's birthday, I never showed you pictures of her French-themed party last year.  It was her favorite party ever!  She still talks about it!  It suited her to a T...full of glitz and glamour.  Maybe it's not too late...

Labels: at home, away from home, stories from home