I snapped these three photos in rapid succession last Sunday while we were at Kristin's house for Gavin's birthday party. Such energy belongs to children! They move from one spot to another so quickly, just doing and being, in a blur of action. Later I thought that this series of photos could also illustrate the blur of time that is childhood. Now you see it. Now you don't. 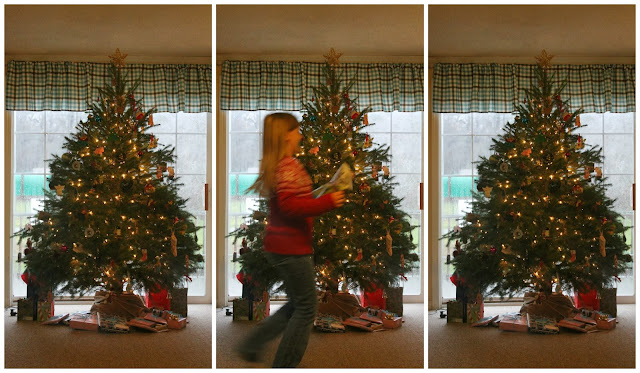 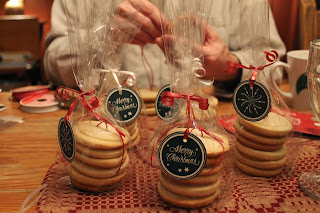 Some of you wondered about Ron's role in the making of the button cookies. Let me assure you that the man took an active role in the execution of said project. He saw it in the Country Living magazine, and he was a man obsessed. He decided that we needed to do these and off he went -- checking ingredients, shopping for containers (CL magazine showed the cookies in paper mache boxes, but we couldn't find the right size), choosing the two sizes of circles to cut and indent the buttons, planning a day to make them. I made the dough (with Ron handing me the ingredients), but I was by no means the director.

I must tell you that Ron is not a regular in the kitchen. He makes the mashed potatoes most of the time, and he cooks the waffles after I make the batter. But occasionally, he gets inspired by a special project and, as I said, he is a man obsessed. A few years ago, it was sweet potato pie. Many years ago, it was a butternut squash and cranberry pound cake. It doesn't happen often, but when kitchen inspiration hits, he will get it done!

Don't you think that these candy cane candles are the cutest things? Deanna brought them to me when they came for a visit on Monday, and I immediately put a pair in the bobbin candlesticks on my pie safe/school cabinet. They are festive and prim, a perfect combo for my farmhouse kitchen! Thank you, Deanna! 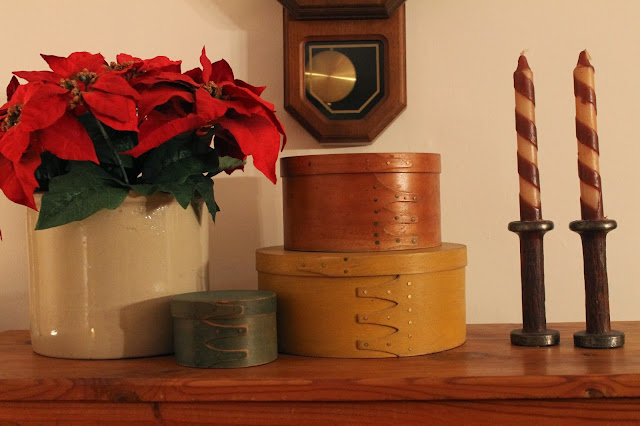 I have a busy day planned today, involving some housecleaning and a bit of Christmas shopping, and some time spent with my sweetheart. I am also preparing for a special project that doesn't exactly fit my "uncomplified"  mode for this season. But it has presented itself, a one-time opportunity, and I am going with it.