My plan to "uncomplify" gets more complified by the day. 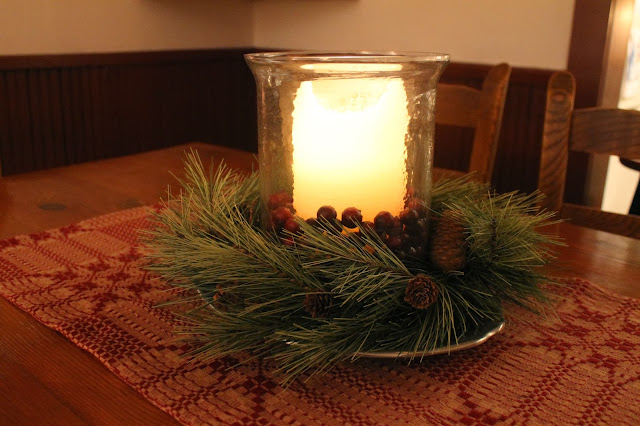 That's the short of it. But since I rarely make anything short, I will fill in the details. (If you just want the short, you have already read it.)

The story of this Christmas season begins in June.

On a stormy summer afternoon, I was astounded when I opened my inbox to find an email from Judy Condon, author of the Simply Country book series, asking if I'd be interested in having my home included in one of her books! Oh my!! After picking myself off the floor, I assured her that, although surprised, I'd be honored to have her consider our humble home. Judy said that she'd like to include our home in next year's holiday book, so she wanted to have the photographs taken when we were decorated for Christmas.


Oh, how positively exciting! We began to do a few house-y projects (painting the front porch and giving it a little update,  building the island, new dining room curtains) and planning some extra Christmas touches. (This is the "special project" to which I alluded in this post.)

More emails, talking with photographer friends, more emails...and I wasn't entirely certain that it was going to happen for this year. In fact, as time went on, I kind of assumed that it wasn't. And since life presented some challenges back in the fall, and we made the choice to keep things simple, it was easy to simplify our Christmas preparations and scale down the decorating for this year.

Then...it was a go! My dear friend (and photographer extraordinaire) Frances conversed with Judy and she will be photographing our house for Judy's holiday book!

So we needed to spruce up the Christmas decorating for this one-time opportunity. Hmmmm...we'll need to have a Christmas tree in the kitchen after all. And the Moravian star will look lonely on the front porch. We'll need to get some fresh pine garland to drape there...and maybe there'll be enough left over to festoon the banister. How soon can we cut fresh greens before Frances comes to shoot? Not too soon...the wood stove will dry them out. Maybe some cute little gingerbread men in a yellow ware bowl would look homey.

Okay. No stress. We can do this. After all, this is a one-time shot, right?  It's worth some extra effort.

But (you knew there was a but, didn't you?)...Saturday afternoon came first.

On Saturday afternoon, we were doing some housecleaning. Kati had invited some friends over for a game party, and Ron and I were going to go out for dinner and some shopping. I was dusting the chandelier over the kitchen table, when it made a popping noise, the bulb flashed and burned out, and then I noticed that every bulb of the chandelier was out. It must have tripped a breaker. Ron went out to turn the breaker back on, and when he did...snap! crackle! sizzle! pop!...and the arm of the chandelier went up in flames!

I thought that I had presence of mind during emergencies, but I did not. I shouted at Ron to "Turn it off! Turn it off! Turn it off!" until my throat was sore. I thought that he didn't hear me so I kept shouting. The problem was that he did not know which of the breakers in the row he had just turned on. Instead, he ran back into the house and turned off the light switch (duh! why didn't I think of that?!) and then proceeded to blow out the flames. Crisis abated.

But (you know what the "but" is, don't you?)...how are we going to have house photos done with a blackened chandelier and no light? 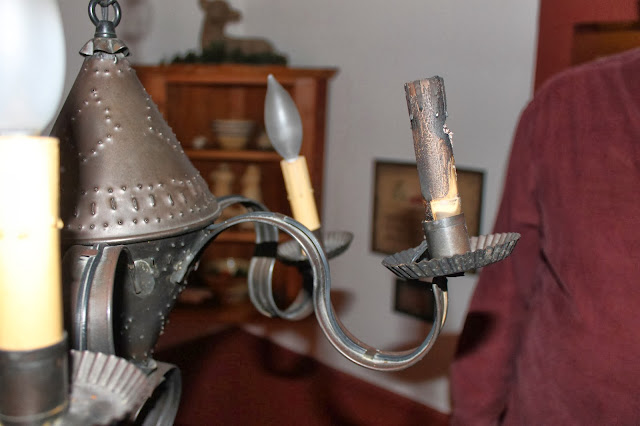 In less than an hour, I had ordered a new chandelier. Now we must wait for it to arrive and for Ron to hang it before we can reschedule the photo shoot. And Christmas is mere days away. Sigh.

But (okay, just one more "but")...all is well. The house is safe. The damage was minimal, limited only to the chandelier. Well have a new chandelier. No one was hurt. Yes, thank you, Lord!

I plan to pop in sometime tomorrow with my annual Christmas house tour post.  Although there won't be any kitchen photos this year, I am just happy to have a kitchen. Hey, I am happy to have a house! Maybe when the new chandelier is up, I'll show you some pictures then.