You kind of have to know my Bekah to understand the idea of extreme thrifting. This is the child who NEVER (I did say NEVER) wants to throw anything away or use something up. This is the child who once kept a beautiful lollipop for months...because if you eat it, it's gone. This is also the child kept the chocolate bunny from her spring basket for an entire year, only eating it (with tears) because she was not going to get one in this year's basket if she still had the old one. Bekah wants to keep sewing scraps, outgrown clothing, every worthless little toy that has come in a fast food kids' meal...and the list goes on. (In hindsight, our first "heads up" was probably the day that we threw away an old mop head, and one-year-old Bekah cried upon seeing it dropped into the trash can. Yes.)

I have been saving some of Bekah's old clothes to use in quilting. I knew that, once she could get past the idea of them being cut, that she would enjoy the idea of seeing her much-loved dresses reworked into a keepsake quilt. Inspired by Anna's scrap quilts , I broke the news to Bekah that I was cutting up her old clothing, and began cutting squares. (She took it fairly well.) 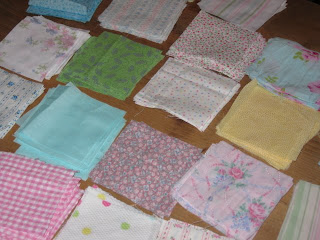 But that's not "extreme" thrifting. I'm getting to that.
As we started choosing our fabrics, Bekah discovered an old dress that had not yet been touched by the scissors.


Bekah: This looks like it could be a shirt.

Bekah: I'm going to try it on.

Me: Well you can, but it's not going to fit.

Guess who was wrong. 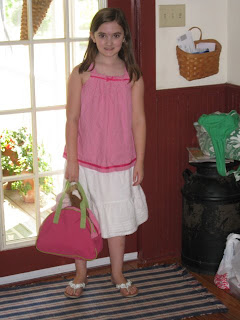 So now Bekah has a new shirt in her wardrobe. I guess we really didn't need hot pink gingham in the quilt anyway. :-)
Posted by Cheryl