Although this is not the year for special birthday posts (last year I posted a message to my husband and each of my four children and eight grandchildren...that was a lot of posting!), I just have to pop in today to say Happy Birthday to my only son Ryan! 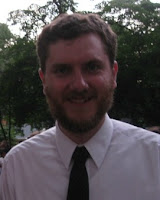 What is a mama to do?  She is a full participant in that day of birth, and then she coordinates birthday celebrations for the next umpteen years...but then they grow up and move away (far too many miles away!)...and they go and have birthdays without you!!
So today I want to tell you a sweet story about my boy and then give him a special birthday message.

We have always been ones who have shortened the names of our children.  At home, Kristin was "Kris" and Ryan was "Ry."  We intended to call Kaitlyn "Kati," but she became "Kate" at home.  And Rebekah's chosen nickname is "Bekah" which usually comes out "Bek."  Verbal laziness?  Maybe so, although there is usually is no lack of verbosity around here.
Does anybody remember Psalty the Singing Songbook?  When my older children were small, we had quite a collection of these Kids' Praise cassette tapes, and the children often listened to them at bedtime.
As an older child, Ryan confessed that he once believed that one of the Psalty songs was about him.  Mentally going over the myriad of Psalty songs that Ryan could relate to, I could not think of the one that I thought had Ryan's name written all over it.  But when he told me, I could see that it did indeed have Ryan's name "written all over it."

The song was "Arky, Arky" and the line that Ryan identified with was:

"So rise and shine and give God the glory, glory!"


which he heard as

Labels: at home, away from home, home celebrations, home musings, stories from home