She said she was sorry the weather was bad
The night that she asked us to dine;
And she really appeared inexpressibly sad
Because she had hoped 'twould be fine.
She was sorry to hear that my wife had a cold,
And she almost shed tears over that,
And how sorry she was, she most feelingly told,
That the steam wasn't on in the flat.

She was sorry she hadn't asked others to come,
She might just as well have had eight;
She said she was downcast and terribly glum
Because her dear husband was late.
She apologized then for the home she was in,
For the state of the rugs and the chairs,
For the children who made such a horrible din,
And then for the squeak in the stairs.

When the dinner began she apologized twice
For the olives, because they were small;
She was certain the celery, too, wasn't nice,
And the soup didn't suit her at all.
She was sorry she couldn't get whitefish instead
Of the trout that the fishmonger sent,
But she hoped that we'd manage somehow to be fed,
Though her dinner was not what she meant.

She spoke her regrets for the salad, and then
Explained she was really much hurt,
And begged both our pardons again and again
For serving a skimpy dessert.
She was sorry for this and sorry for that,
Though there really was nothing to blame.
But I thought to myself as I put on my hat,
Perhaps she is sorry we came. 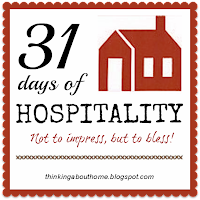 Doesn't this old poem put things in a different light?
Posted by Cheryl