Since I wrote a 31-day series on hospitality back in October, some of you assume that I have it all together and throw fabulous dinner parties on a regular basis.

We do host almost all of our family's holiday dinners, and we have our married daughter Kristin and her family over every Sunday (although they aren't "company").  But I can be the victim of my own procrastination and don't have people over nearly as often as I would like!

The gathering that I talked about this week...well, it almost didn't happen because of that procrastination!  I had spoken with the other moms in our co-op about having a game night and ran a couple of dates past them.  And then life went on and I kept forgetting to finalize the date and decide whom to invite and then I thought I had enough time to ask everyone and then I realized that it was Monday and I had planned the party for Friday. Yikes!  So I emailed invitations and sent private Facebook messages to the ladies, and, believe it or not, everyone except for one friend could come.  Hooray!

Besides the fact that I got off to a rocky start with my delayed invites, everything else went along fairly smoothly.

There were several things that helped in making the evening relaxing and enjoyable.

1)  I kept the menu simple and accepted offers from my guests.

I checked the weather forecast and decided that it would be cool enough to serve soup.  I love making soup and I think that it simplifies the rest of the menu.  Soup, salad, bread, and dessert. That's it.  Whew!  I made  Creamy Chicken and Wild Rice Soup, springboarding from a recipe that Kati had seen on a blog that she follows.  One of my guests volunteered to bring a salad. Another volunteered to bring bread.  Bekah and I made dessert.  (More on that later.)  I had planned to make hors d'oeuvres (spinach-artichoke dip and bagel chips), but I forgot.  The brain...sigh...

2)  I made a schedule of all that must be done ahead.

Now remember, I didn't even know if this was going to fly until Tuesday, so I didn't have lots of time to prepare.  But I knew that Kati, my right-hand-girl-and-party-partner, was going to be out of town for most of Friday, so I knew that I'd have to have my ducks in a row to be prepared by Friday evening.  So I planned out blocks of time to take care of all the "necessities" (necessities on my list anyway; your list might look different), juggled the regular housecleaning schedule, and made lists.

Really, the only "extra" think I did was to apply the magic treatment to my white dishes.  And they really needed the touch up; it had been a year.

3)  I went with a casual feel and planned my table accordingly.

With a simple menu and a simple theme (games), casual seemed the way to go.  I went to my napkin cabinet (yes, I do have such a thing!) and found a package of yellow paper napkins that I had purchased last year at Ikea.  (If you're ever in Ikea, be sure to pick up a few packages.  They are large dinner-size napkins.  They come in lots of pretty colors.  There are fifty in a pack. They are cheap...$1.99.  Get some.)  I was going to use my white dishes (remember those?), and I thought that the bright yellow napkins would be spring-y and cheerful.  I don't mind using paper napkins in a casual setting.  Do you?

When I went food shopping, I picked up a pot of yellow tulips (also spring-y and cheerful) to use as a table centerpiece.   I took off the (ugly) flowered plastic stuff wrapped around the pot, and plopped the plant in an old yellow ware bowl that I took from a kitchen shelf.  I went back to the same cabinet (it also houses all my table linens) and chose a white homespun runner.  I put white candles in some pewter candlesticks...and all of my decorating was done.


TMI?  (Too much information?)

Probably so.  Ron suggests that I often use too many words to answer a question or tell a story (ahem), and I have probably answered questions that you didn't even have in the first place! But you did ask some questions and I am going to answer them here in as few words as possible.  Or not.

What did you make? That dessert looks yummy, did our Kati  make it?  (Notice how she is now our Kati?)

The dessert was Lemon Cheesecake Mousse.  The day after I sent out my e-invites, this luscious dessert was featured on the Reluctant Entertainer.  Sandy said it was yummy and easy...two key words!  It certainly was beautiful, so I decided right then that this would be our dessert for Friday evening.

I asked Kati about how difficult it would be to pipe the mousse into the ramekins.  Bekah quickly said that she thought she could do it, so when Kati left for the day, she left Bekah the decorating tips for the job.  When it came time to make the dessert, Bek jumped right in, squeezing lemons, grating zest...and piping that mousse into the ramekins!  She had never piped before, and was a little disappointed that they weren't perfect, but I assured her that they were gorgeous!  What do you think? 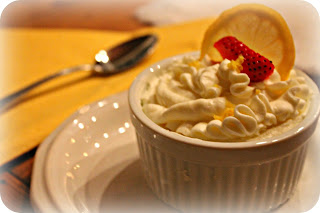 What was the main course?

The main course was Chicken and Wild Rice Soup.  I'll share the recipe sometime next week.

What kind of games?

We played Catch Phrase and Apples to Apples. 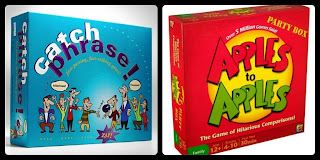 Catch Phrase is kind of a word-lover's "hot potato."  A player tries to get her team to guess the word or phrase displayed on the game gizmo, all while the beeper is beeping faster and faster. When the team guesses correctly, the gizmo is passed to the next team who must do the same thing.  If the buzzer goes off when your team is holding the gizmo, the other team gets a point. Unlike Taboo or Pictionary which have limits to how to get your team to guess, in Catch Phrase you can use words or gestures or sound effects or almost anything except saying the word or the letters in it.

This game is where a lot of the laughs came in!  Imagine having to describe a rather shocking word while all of your teammates are shocked at your description.  I will say no more.

Apples to Apples is much slower paced, but lots of fun as well.  Players try to match one of the red cards in their hands to the word on the green card played by the judge who will then select the red card that she thinks is the closest match.  Players all take turns being the judge.

How long did the ladies stay?

Dinner was served at 6:00 pm.  We chatted over dinner, and then lingered while chatting some more.  There was more talk over dessert and coffee/tea.

Here's that dessert recipe I promised...

As I said in this post, I always wonder why I don't do things like this more often!  It takes a bit of planning, but it is so rewarding to open your home and provide a time of fellowship and encouragement for friends and family.