Because we live in an imperfect, fallen world, things are broken and in need of repair.  The past few weeks, we have been surrounded with repairs...or need for repairs. 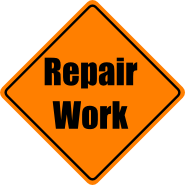 First, it was our van.

We bought the van in October, and on our first trip in it (our trip to Lancaster, Pennsylvania), we had a short preview that something was wrong.  As we're driving along on the highway, suddenly the horn started beeping, the wipers wiping, the headlights flashing, automatic locks locking!  Ack!  Ron pulled into a parking lot, turned off the engine, and exchanged keys with me. Maybe his remote access key needs a new battery?  The rest of the trip was uneventful (van-wise) and we assumed all was well.

But over the next months, such car antics happened from time to time, on a seemingly random basis.  Including the first time that Kati drove us to church.  (Have I told you how totally inept I am at teaching a new driver?  Total fail.  As in...Ron and a dear friend did all of the teaching. Now you know.)  It also happened once with the "good" key.  So much for that theory.

A few weeks ago, Ron went outside to pull the van up to the door on a Sunday morning, curbside service for his slow girls.  Before he even reached the van, the horn started blowing! Not beeping, as in on-and-off.  Blowing, as in deafening constant noise that will not stop. Wipers were going, lights were flashing, locks were locking.  And the key was not even in the ignition. Trying to stop the insanity, Ron opened the door, got in, and started the engine.  He tried to manually turn things off.  Nothing changed.  He turned off the engine, and removed the key from the ignition...but the van kept running!   Ack!

What does a good wife do in such cases?  She googles!

I googled all of the symptoms...and up came the year and make of our van!  Oh no.

One source said to disconnect the battery.  So I sent Kati outside with that message.  Of course, the horn noise was so loud that she had to shout at the top of her lungs to convey that message.
The bad news is that he had already disconnected the battery...and the engine kept running and the horn kept blowing.  Crazy!

He started pulling fuses until he found the one that stopped the insanity.

The next night, he put in the fuse and drove it to the dealer.  It was in their shop for over a week.  And, of course, it was very well-behaved and displayed none of its antics for the repair man.

Finally, they replaced the "brain" which controls all of the communications in the electrical system.

In the meantime, Henrietta was repaired.

You may recall that someone may have spilled her evening coffee on Henrietta in January.  I kept procrastinating about taking her in to the laptop repair shop.  I suspected that it would cost a fortune, or that it wouldn't be fixable and we'd need to buy a new one.  So Kati and I learned all of the tricks you can learn (I think) to work around her non-functioning keys, and we did some things on the desktop because Henrietta  would not do them, and we juggled and somehow continued to do blog posts and Facebook stuff.  (We could read anything, so that was not a problem.  We were sometimes "phantoms" because we could read, but not type or comment until we got to the desktop.)  But finally, I decided to bite the bullet and find out what needed to be done.

One repairman told me that it would cost $369 to repair Henrietta.  No, thank you.  That would be a large chunk towards a new one!

I took her to another shop...who replaced her keyboard for $45 and returned her to me in less than 24 hours!  Hooray!  (If I had only done that two months ago...)

Now it's the car.

When we purchased the van, Ron decided to keep the old car for Kati to drive.

This week, Kati got her driver's license (yay, Kati!).  So on her first full day of having her license, she went out to run a birthday errand.  Gift purchased, leaving the parking lot, she stalls out at a stop sign.  Car. will. not. start.  Lady behind her is irate and rude.  But a kind gentleman comes to her rescue.  He also tries and fails to start the car, but then pushes her into a vacant parking space.

Last night, Ron had the car towed to a repair shop.  They will look at it on Monday.

And it's also us.

Yes, all four of us are sick with yucky colds.  Sniffly, sneezy, drippy, stuffy, body-achy colds.  I have a hundred things to do today, as Bekah's (12th!) birthday is tomorrow, and we are having a family birthday party for her on Sunday.  And here I sit, feeling yucky, and typing away in my jammies.  Maybe I'll get that birthday bunting made today.  And the house cleaned (so that we can do fun things on her birthday tomorrow).  And her birthday cheesecake made.

Or maybe we're just down for repairs...