Bread On Tuesday {Round Up}

This post will serve as a parking place where you (and I!) can find links to all of the bread recipes that were featured in Bread On Tuesday these past weeks.  Does it look like a Mecca for carb eaters?  (And perhaps a Vanity Fair for those who abstain?) 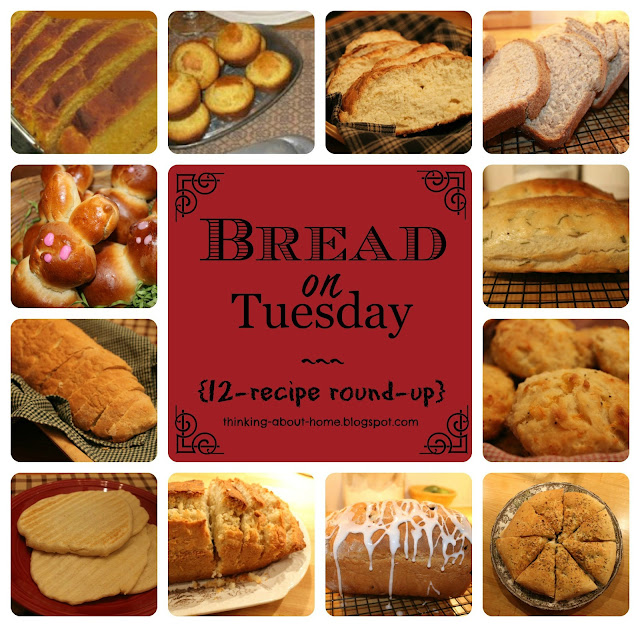 And how about a few bonus breads...
some recipes that were not a part of this series?


Here is a link to Kati's Greek Olive and Feta Bread.  I've never made this bread, but I have eaten it and it is delicious!

Vee made some yummy-looking cheesy breadsticks for a birthday party in January.  I must try these!

Another recipe I intend to try is Podso's Cool Rise French Bread.  Make the dough ahead and refrigerate it until time to bake?  Yes!

Kristin served this Honey Cornbread when we came for dinner.  Even my reluctant cornbread eater loved it!

And then there's one of my favorite bread recipes:  SallyLunn.

As I told you at the beginning of my Bread On Tuesday series, I live with a girl who loves to bake, and she has done most of the bread baking around here in recent years.  But I decided to challenge myself to make 10 (I extended it to 12) different kinds of bread this winter, using both old and new recipes.  I believe I have rekindled my love of bread-making!  (Kati will have to share her baker's hat.)

So what about you?  Are you ready to don your baker's hat?