I think that marking an occasion is one way of raising an Ebenezer.

What is an Ebenezer?, you ask.

An obscure line in the hymn "Come, Thou Fount of Every Blessing"?  Getting closer.

The real root of the word is in the Bible, in I Samuel 7.
After a series of battles with the Philistines, Samuel had called Israel to repentance and they had responded. They gathered at Mizpah...they fasted, they confessed their sin, and repented.  But as they were gathered, word came that the Philistines were again coming against them in battle. They called out to God, and Samuel offered sacrifices. The Lord answered with a "great thunder" that confused the Philistines, and Israel soundly defeated them.

(Now we come to the Ebenezer part.)

I propose that celebrations can be a sort of Ebenezer. As we mark an occasion, a milestone, or a holiday, we can say, "Thus far the Lord has helped us." 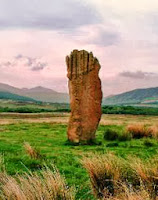 We can celebrate that birthday person while being mindful that God has brought him into our lives, while thanking Him for the circumstances of her birth, while rejoicing in the blessing that this person is to us."Thus far the Lord has helped us."

We can celebrate that milestone of graduation or anniversary or first day of school with gratitude for God's intervention and acknowledging that He has directed. It is His gift. "Thus far the Lord has helped us."

Marking an occasion as an Ebenezer, a "stone of help," can make all the difference in how we celebrate!

This is Day 2 in the series CeLeBRaTe!!  Click ~here~ to see more.