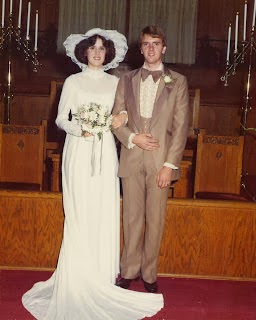 During the first year of our marriage, we celebrated every month!  On the 19th of each month, I tried to make a special meal and we'd eat by candlelight.  Ron's work schedule sometimes meant we had to wait for the weekend, but we did our best. Those first months were exciting!

On our first anniversary, we unwrapped the top layer of our wedding cake and reminisced. We also wondered who in the world started that tradition  because that slice of wedding cake was not the yummy treat we had imagined. We dreamed, and thought that maybe we'd go on a cruise for our 10th anniversary.

On our second anniversary, I was in the hospital with a one-day-old baby girl!

Over the years, we have celebrated our anniversary in many different ways, most of them simple. (Our celebrations were often dictated by our finances!)

Most of the time, we went out for dinner. Occasionally, we'd just exchange cards. (And to be totally honest here, there were anniversaries when only one card was given, because Ron one of us forgot to buy a card. Oops.)

On our 10th anniversary, I kidnapped my husband! I arranged for the kids to stay with my parents. I called the man for whom Ron was doing a side job to let him know that Ron would not be working that Saturday. I packed an overnight bag for both of us. And after we ate our anniversary dinner at a seafood restaurant, I told him that I'd be driving and I whisked him off to the town (and the same motel) where we had spent our first night together. (We didn't have the money to go on a cruise, but it didn't matter.)

On our 20th anniversary, Ron had intended to surprise me with a new wedding band and a one-day cruise. We would drive to meet the boat, where we'd cruise to an island for the day. But my dad had heart bypass surgery and the cruise was cancelled. (I loved the wedding band, though!)

On our 25th anniversary, Kristin and Ryan, assisted by Mom, gave us a surprise anniversary party! It was a delightful day of celebrating with family and friends.

I have told you about our recent 35th anniversary getaway. It was a relaxing, meaningful time spent together. We can hardly believe we've been married for 35 years!

(Guess what? We don't even want to go on a cruise anymore. Really!)

So what was the purpose of my taking you on this little trip through time?

There are so many ways to celebrate a wedding anniversary...big and small, simple and lavish, expensive and inexpensive, private or with family or friends. I don't think it really matters so much how we celebrate.

I think what really matters is that we honor marriage.

That we take the time to say "you are important to me" in a hundred little ways.

That we allow Christ to be seen in us as we live out the picture of Christ and His Church. "This is a great mystery, but I speak concerning Christ and the Church." (Ephesians 5:32 NKJV)

CeLeBRaTion Tip of the Day:
Celebrate the fact that God can take two flawed human beings and make them into a picture of Christ and His Church! Amazing!

This is Day 25 in the series CeLeBRaTe!!  Click ~here~ to see more.