This week's recipe falls in the "tried and true" category, so when Kati brought home a bag of peaches from a friend, I knew that some of them would end up in this crisp! (This dessert is worth turning the oven on for an hour.)

Nothing says summer like warm-from-the-oven crunchy peach crisp with a scoop of vanilla ice cream alongside.

Okay, maybe other things (garden tomatoes, corn-on-the-cob, homemade ice cream) say summer too, but this sure does say summer at our house!

Mix oats, brown sugar, and flour. Cut in butter until crumbly. (Stir in nuts, if you're using them.)
Place on top of peach mixture.

Bake at 350 degrees for 1 hour, until topping is golden.

Join me next Wednesday for the final recipe in my Savoring Summer series! 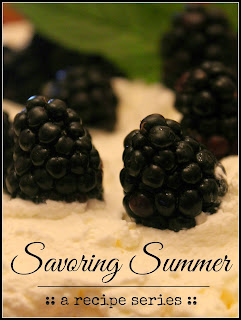